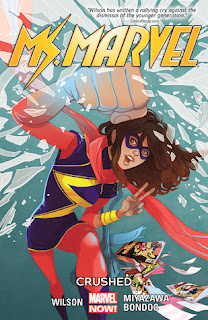 I am still really enjoying this series.  I think that this is a perfect series for young girls and totally what the whole DC New 52 Batgirl revamp was going for but failed at. There are a few tie-ins to this comic.  Loki makes and appearance and so does SHIELD.  I am guessing it is the SHIELD from the show since those characters were the ones we read about here. The artist changes here so we lose some of those cool little funny drawings that happen in the backgrounds of the panels.  Loki's part in this book is kind of funny.  He tried to help Kamala's friend Bruno ask her out to a dance at their high school.  Apparently there is a big story going on during the publication of this comic called Secret Wars so this is one of those comics stuck in limbo until that is over.  Then I'll have to try to figure out what is happening after the Secret Wars.  DC does this too.  Ugh.  I wish I knew a little more about the Marvel universe but alas there are just too many comics to keep up with. 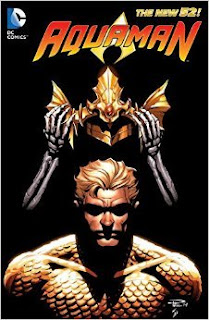 I have enjoyed the Aquaman series so much.  I started reading it as soon as the New 52 relaunched all the comics and I think it is still wonderful. In this comic we read about how Atlantis has been rejecting him.  There have been many earthquakes and whatnot.  This is because Arthur is half human and have Atlantian. He is trying to figure out how to fix this.  In this issue the Martian Manhunter, Solovar and the flash villain Gorilla Grodd all make an appearance. Mera is such a strong character in the Aquaman comics, she isn't made some sort of sidekick.  She is pretty much a main character. I really love the art work too.   There is a great villain in this comic too, the Chimera, who is a good match for Aquaman especially since the Chimera can also speak to and control sea life. 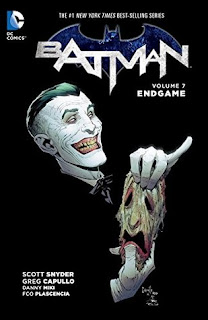 I have really enjoyed this Batman series.  This one I was a little confused at the beginning.  Where did Alfred's daughter come from ( I think I read that this was in Batman Eternal I just can't keep up). At the beginning of the comic BOOM the Justice League shows up and starts attacking Batman.  Who then reveals that the Joker is back.  He has sent out a toxin to all of Gotham.  (It is never revealed how the Justice League is given the toxin).  So this comic takes everything you know about the Joker and throws it out the window.  MAJOR SPOILERS COMING.  I wouldn't normally put the spoilers in my comic reviews but we've got to talk about this.  The Joker is now out to kill Batman (he never was before) and actually manages to do it by the end. Alfred loses a hand....  Joker's face is grown back on.  There is a lot going on in this book.  Plus I just read that there is a Batman vol. 8 coming up.  So is Batman coming back from the dead already?? What happens to other comics in the Batman series when the main character dies off???  3 out of 5 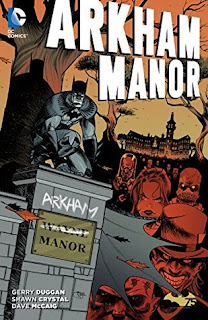 OK... I really had no idea what this was going to be about when I first checked it out from the library.  Turns out that Arkham was destroyed in the Batman Eternal Comics (I haven't been reading those) so Wayne Manor is now Arkham because of martial law. So... Batman goes undercover as a patient in Arkham in his own house. He goes all detective mode because as soon at Arkham Manor opens patients are dying. I thought this was a good Batman detective comic.  We don't have him running all over Gotham, we get him running around the mansion the entire issue figuring things out.  Though it does concern me about the future Arkham Manor comics.  Will they all be taking place in the mansion with Batman running around trying to figure things out???  I liked this comic but there are just so many Batman titles out there I am not sure if this one can hold up.


This counts for 4 comics towards my 2016 Graphic Novels Challenge. 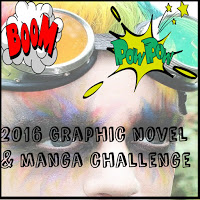