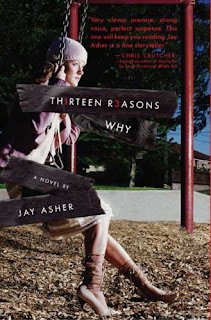 Thirteen Reasons Why by Jay Asher
This book blew me away! I read it for my book club's pick for August YA Book Club Goodreads description:
Clay Jensen returns home from school to find a mysterious box with his name on it lying on his porch. Inside he discovers thirteen cassette tapes recorded by Hannah Baker, his classmate and crush who committed suicide two weeks earlier.

On tape, Hannah explains that there are thirteen reasons why she decided to end her life. Clay is one of them. If he listens, he'll find out how he made the list.

Through Hannah and Clay's dual narratives, debut author Jay Asher weaves an intricate and heartrending story of confusion and desperation that will deeply affect teen readers.
What can I say about this book other then FABULOUS!
SUICIDE. No one talks about it enough. Yet most people have thought about it. This book amazingly follows a young girl's life and the events that lead up to her Suicide. I think it does a great job of showing how someone who is depressed can just tumble down through a series of events. Really you have no idea how you can affect someone's life with a smile or a snide comment.  I am happy to hear there is going to be a movie based on this novel!  Thirteen Reasons Why Movie!
Possible spoilers:
Once I hit the half way mark of this book I can tell why things went downhill for Hannah. I think she had serious depression. I say this because someone in their right minds wouldn't allow things like the raping of that girl to happen. I think that her type of behavior showed serious mental problems. She possibly OK definitely needed medication.

I guess I do think one thing could've changed whether Hannah committed suicide and that was the teacher Mr. Porter. Now he didn't mean to do this and I am NOT blaming him. But he was her last resource and unfortunately for him he was the breaking point. He didn't say anything wrong to me but he didn't say anything right either. Makes me sad.

The worst part or I should say the hardest part about reading this was that Hannah really was trying to get out of the funk. She tried poetry and that back fired. She tried fishing for compliments with her new hair and that didn't work, she tried so much and yet failed every time. I hate to say it ... but I have had real depression before. I remember this one time my cats got in a little fight and I just bawled over it like it was the end of the world. That is what Hannah made me think of.

I read this book in two sittings and I can say that it really got emotions riled up inside me. 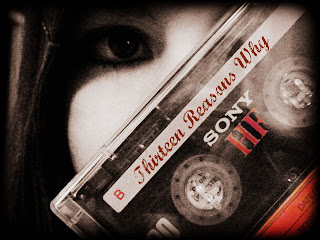 Did you know you can listen to the tapes.  I found them on the Jay Asher's website!  Here is a video of tape 1...