Here is the 2000-2009 banned books!  I think it is very sad that there are even books that are censored in our society!   I thought I would go through the list and highlight all the books I have read on this list.  Be sure to check out their site!  Banned Books 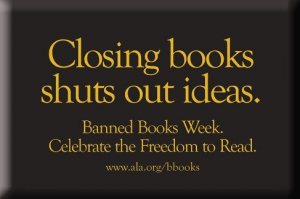 100. America by E. R. Frank
99. Are You There, God? It’s Me, Margaret by Judy Blume
98. I Saw Esau by Iona Opte
97. The House of the Spirits by Isabel Allende
96. Grendel by John Gardner
95. Shade’s Children by Garth Nix
94. Goosebumps by R. L. Stine
93. Bumps in the Night by Harry Allard
92. The Boy Who Lost His Face by Louis Sachar
91. Julie of the Wolves by Jean Graighead George
90. A Wrinkle in Time by Madeline L’Engle
89. Friday Night Lights by H. G. Bissenger
88. The Handmaid’s Tale by Margaret Atwood
87. Tiger Eyes by Judy Blume
86. Cut by Patricia McCormick
85. Staying Fat for Sarah Byrnes by Chris Crutcher
84. So Far from the Bamboo Grove by Yoko Watkins
83. Detour for Emmy by Marilyn Reynolds
82. Deal With It! by Esther Drill
81. Black Boy by Richard Wright
80. A Day No Pigs Would Die by Robert Newton Peck
79. The Upstairs Room by Johanna Reiss
78. The Joy of Gay Sex by Dr. Charles Silverstein
77. Crazy by Benjamin Lebert
76. A Prayer for Owen Meany by John Irving
75. Anastasia (series) by Lois Lowry
74. The Lovely Bones by Alice Sebold
73. What’s Happening to My Body by Lynda Madaras
72. Song of Solomon by Toni Morrison
71. Junie B. Jones (series) by Barbara Park
70. Harris and Me by Gary Paulsen
69. Fahrenheit 451 by Ray Bradbury
68. Always Running by Luis Rodriguez
67. A Time To Kill by John Grisham
66. Roll of Thunder, Hear My Cry by Mildred Taylor
65. The Things They Carried by Tim O’Brien
64. Mick Harte Was Here by Barbara Park
63. The Terrorist by Caroline B. Cooney
62. The Stupids (series) by Harry Allard
61. Draw Me A Star by Eric Carle
60. Speak by Laurie Halse Anderson
59. Olive’s Ocean by Kevin Henkes
58. Fat Kid Rules the World by K. L. Going
57. Blood and Chocolate by Annette Curtis Klause
56. When Dad Killed Mom by Julius Lester
55. Summer of My German Soldier by Bette Green
54. The Facts Speak for Themselves by Brock Cole
53. You Hear Me? by Betsy Franco
52. The Great Gilly Hopkins by Katherine Paterson
51. Daughters of Eve by Lois Duncan
50. The Kite Runner by Khaled Hosseini
49. One Flew Over the Cuckoo’s Nest by Ken Kesey
48. Rainbow Boys by Alex Sanchez
47. The Adventures of Super Diaper Baby by George Beard
46. Slaughterhouse-Five by Kurt Vonnegut
45. Crazy Lady by Jane Leslie Conly
44. Athletic Shorts by Chris Crutcher
43. Blubber by Judy Blume
42. The Fighting Ground by Avi
41. Whale Talk by Chris Crutcher
40. Life is Funny by E. R. Frank
39. Kaffir Boy by Mark Mathabane
38. Arming America by Michael Bellasiles
37. It’s So Amazing by Robie Harris
36. Brave New World by Aldous Huxley
35. Angus, Thongs and Full Frontal Snogging by Louise Rennison
34. The Earth, My Butt and Other Big, Round Things by Carolyn Mackler
33. Snow Falling on Cedars by David Guterson
32. Bless Me, Ultima by Rudolfo Anaya
31. What My Mother Doesn’t Know by Sonya Sones
30. We All Fall Down by Robert Cormier
29. The Face on the Milk Carton by Caroline B. Cooney
28. Bridge to Terabithia by Katherine Paterson
27. My Brother Sam is Dead by James Lincoln Collier
26. Beloved by Toni Morrison
25. Killing Mr. Griffen by Lois Duncan
24. In the Night Kitchen by Maurice Sendak
23. The Giver by Lois Lowry
22. Gossip Girl (series) by Cecily von Ziegesar
21. To Kill a Mockingbird by Harper Lee
20. King and King by Linda de Haan
19. Catcher in the Rye by J. D. Salinger
18. Go Ask Alice by Anonymous
17. The Color Purple by Alice Walker
16. Forever by Judy Blume
15. The Bluest Eye by Toni Morrison
14. The Adventures of Huckleberry Finn by Mark Twain
13. Captain Underpants (series) by Dav Pilkey
12. It’s Perfectly Normal by Robie Harris
11. Fallen Angels by Walter Dean Meyers
10. The Perks of Being a Wallflower by Stephen Chbosky
9. TTYL; TTFN; L8R, G8R (series) by Lauren Myracle
8. His Dark Materials (series) by Philip Pullman
7. Scary Stories (series) by Alvin Schwart
6. I Know Why the Caged Bird Sings by Maya Angelou
5. Of Mice and Men by John Steinbeck
4. And Tango Makes Three by Justin Richardson
3. The Chocolate War by Robert Cormier
2. Alice (series) by Phyllis Reynolds Naylor
1. Harry Potter (series) by J. K. Rowling 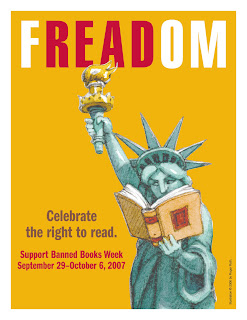 Are you surprised about any of the books on the list?
Posted by Angela's Anxious Life at Wednesday, September 28, 2011