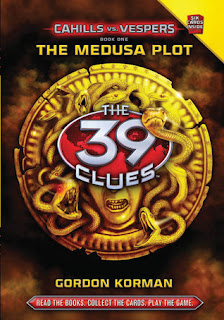 The 39 Clues: The Medusa Plot by Gordon Korman


I just absolutely love this series!! For me this is actually book 12 but this is the first book in the new part of the series called Cahills VS Vespers.  Here is the goodreads description:


Are you ready to save the world? The bestselling series returns with an adventure spanning 6 explosive books, 2 secret-filled card packs, and a website that places readers right in the action. Thirteen-year-old Dan Cahill and his older sister, Amy, thought they belonged to the world's most powerful family. They thought the hunt for 39 Clues leading to the source of that power was over. They even thought they'd won. But Amy and Dan were wrong. One by one, distress calls start coming in from around the globe. Cahills are being kidnapped by a shadowy group known only as the Vespers. Now Amy and Dan have only days to fulfill a bizarre ransom request or their captured friends will start dying. Amy and Dan don't know what the Vespers want or how to stop them. Only one thing is clear. The Vespers are playing to win, and if they get their hands on the Clues . . . the world will be their next hostage.

The adventure continues. If you are looking for a book that is about adventure, traveling around the world, clues, and yes even murder. These book are like the Amazing Race or the Davinci Code. Now the characters are much older and the books do read that way.  I like too how now all the characters who were fighting are now team members learning to work together.  These books are pure magic!  I thought for sure that after book 10 this series was done, and when I found out there were going to be more books I was disappointed.  But once I started reading the new series I was sucked it... need I say it again? MAGIC!