The Silent Blade by RA Salvatore 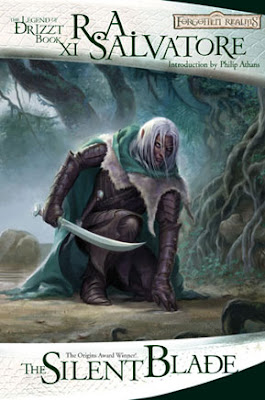 The Silent Blade by RA Salvatore

I have been reading this series for a while, here is the goodreads description:

Can the Crystal Shard be destroyed at last? Drizzt is determined to destroy the evil Crystal Shard, and seeks out the help of the scholar-priest Cadderly. But instead, his worst fears are realized, and Crenshinibon falls into the hands of the dark elf mercenary Jarlaxle and his unlikely ally Artemis Entreri. The Silent Blade is the book that brought Drizzt back to the Realms, and was a New York Times best seller on its initial release--and has been in print every day since. Like the rest of the Legend of Drizzt(R) reissues, The Silent Blade features beautiful new cover art by award-winning illustrator Todd Lockwood.

What a boring and awful book in this series. Personally I think that this might be where I take a long break from the story of Drizzt.  Which is too bad because I love these books.  The characters are all separated going through their own situations.  We have Wulfgar who is depressed and out on his own.  Drizzit running around trying to get rid of this shard that has been with the series since the beginning.  And Entreri whom I am actually enjoying is off on his own.  My problem is this book seems like a filler book.  Nothing is really happening.  All we are doing is reading along until the end when they just get onto the next book.  This is the first book in an arc of 4 I think and I don't know if I can read each of these!!!

This is the only one in the series I have found to be a bad book.  Could've been the mood I was in too but after reading the reviews on goodreads I am not the only one who feels this way.