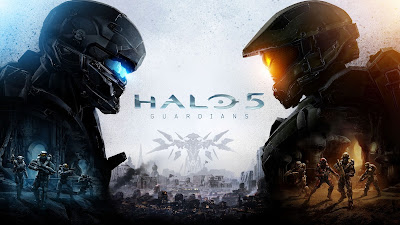 I have been anticipating the launch of this game for years.  I have loved the Halo games since day 1. What I really like about Halo is it is more then just a video game.  It has a huge lore behind it. Books, art, cosplay, graphic novels, you name it.  The 5th game really gets into the story that is also in the books.  The strategy behind the campaign for the game was clever too.  Locke against Chief.  Was the Master Chief bad?  It worked so well that this game was the highest grossing Halo game so far. There was a podcast called Hunt the Truth which helped make the game more interesting ... even a Tumblr page.  I would suggest listing to the podcast before starting the game.

Honestly reviewing this game is hard for me since I love Halo so maybe I am biased.  So in this game you switch between two characters, Spartan Jameson Locke and Master Chief though most of the game you play as Locke. The Blue Team (Chief's team) are all characters from the books... so for those who haven't read the books you probably won't be as excited to see them together as the readers are. The campaign is a blast, though I was disappointed right away that 343 took away co-op mode. Usually my husband and I play this game together and this time we had to pass the controller back and forth.  Though you can play the campaign mode online with friends.

The disk itself works great.  It that an odd thing for a reviewer to say?  You're damn right it is. That's because I had such big issues with the previous game 'The Master Chief Collection'.  I never reviewed that game because it's crap.  I could never get an online multiplayer game working and I couldn't even get the campaign to work.  I assumed it would all be solved so I never took that game back to the store.  Eventually I uninstalled and reinstalled the game but honestly I never bothered to get on and see if it would run (this was a few weeks before the release of Halo 5).  I was nervous about even getting to be able to try out the multiplayer mode on Halo 5 but the good news is that as soon as I tried multiplayer I got right into a match.

This game is part of a trilogy.  I saw a lot of people complaining about that saying it's a money maker.  I am the cheapest person in the world and for once I disagree.  This game to me was just as long as any of the Halo games if not a little longer then some (I'm looking at you ODST).  Because of this fact I didn't have a problem with it being about 8 -10 hours.  If the previous games were like 20-30 hour games then I would be like "what the hell!".

One thing I love about this game too is all the Halo female leads.  I mean.. YES! That gets me pretty excited.. even if we have Cortona in the game as a villain.  Makes that game even more exciting.  I look forward to Halo 6.