It's Your World: Get Informed, Get Inspired, & Get Going by Chelsea Clinton 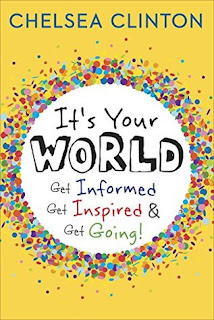 In a book that tackles the biggest challenges facing us today, Chelsea Clinton combines facts, charts, photographs and stories to give readers a deep understanding of the world around them—and how anyone can make a difference. With stories about children and teens who have made real changes big and small—in their families, their communities, in our country and across the world—this book will inspire readers of all ages to do their part to make our world a better place. In addition to informing and inspiring readers about topics including Poverty, Homelessness, Food Insecurity, Access to Education, Gender Equality, Epidemics, Non-Communicable Diseases, Climate Change, and Endangered Species, this book encourages everyone to get going! With suggestions and ideas for action, Chelsea Clinton shows readers that the world belongs to every single one of us, and every one of us counts. You can make a difference. You can make a change. It’s your world. Praise for It's Your World: "Clinton clearly paid attention to her parents' discussions at the dinner table, and she capably shares the lessons they imparted about the future impact of what we do in the present."--Publishers Weekly "[A] terrific resource for junior activists."--Booklist

This book was never on my radar.  In fact, I had never even heard of it.  There aren't very many reviews on goodreads about this book either.  I saw that Chelsea Clinton was going to be doing a book signing at a local bookstore.  I then saw the title of the book and the cover.  I'm not someone who is big on politics so I could care less of Chelsea is the daughter of Bill Clinton or not.  I know some people might avoid reading this book because of that fact.  I am about the same age as her and remember her being the child in the white house so that does make me interested in her.  Also... I love to learn new things about the world and things I can do to make the world a better place.

I really like the cover of this book.  The confetti pops up off the cover.  I also hope that this cover would attract young adults which is who the book is written for. I did see though some people complain about this cover... that it's too much for children and not teens.  Even though this book is written for teens I still found a lot of information in it quite informative. What I like about this book is that big complicated subjects are broken down.  I think the way Clinton explains things is not condescending and doesn't make me feel uneducated for not knowing more about the subject.

The subjects included so many things that should concern all of us.  Homelessness, hunger, education in the US and in the world.  I was more interested myself in the things happening in the US.  After each chapter Clinton gives an example of a young adult who makes a difference and then website resources for you to go to read up on these situations.  This is a long book... so there were some areas I just skimmed.  Let's be honest, the kids in this book who had started projects at their schools had to have help from adults-with money.  I really don't think just any kid could set up a big lego drive at their school without the help of adults buying said legos.

I don't know if it's a coincidence that this book came out around the time Clinton's mother is running for president.  Maybe it was smart so Chelsea could make more money on it???  I think that being a daughter/son of a president would be tough.  Once you become an adult you are expected to go out and do good in the world not just be some Average Joe. Now she is a wife and a mommy.  I am sure a lot of this information could be found on the internet but having it all in one place was great.  A good book for teens.  I wish I would've went to the book signing. 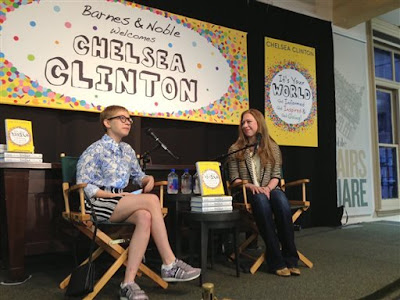