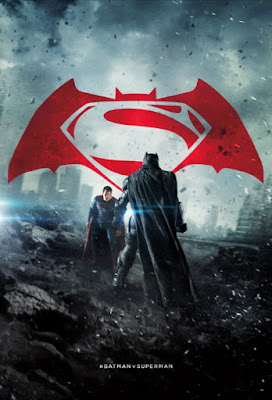 For those of you who visit my blog often, you know I love my comics.  I review comics at least twice a month here.  I am partial to DC comics though I do love Marvel movies. I have been looking forward to this movie for quite some time.  This movie really consists of three main DC comic book characters, Batman, Superman and Wonder Woman.  Wonder Woman is a character I have loved since I was a little girl. You have probably seen that the movie is getting average reviews and I pretty much agree.  Too much going on in one movie.  DC is trying to catch up with Marvel as fast as it can.  Marvel has the Avengers assembly of characters already locked in the movie market so DC is trying to get the Justice League up in there too.

I wish DC wasn't in such a hurry to get caught up with Marvel. Some intro movies would've been good. I remember when I found out Man of Steel wasn't getting a true sequel and was getting this instead. Non-comic book readers needed to get to love Superman more. There were some clips in this film that I think are going to confuse people who are new to the Justice League.  One seen was even a little confusing to me... like what was DC trying to get at?  The film is a little disjointed.  Dreams were thrown in where they shouldn't have been.  A museum seen that just seemed out of place.

I will say though I was pleasantly surprised by the actors.  I dreaded Ben Affleck as Batman. I was SHOCKED when Gal Gadot was cast as Wonder Woman.  But in the end... they both succeeded in the rolls.  Affleck plays a great Bruce Wayne.  Of course I have always loved Henry Cavill as Superman.  And the love between Superman and Lois Lane in this film was spot on.  Though she did seem to keep being the damsel in distress. I didn't really like Jesse Esienberg as Lex Luthor.  It was WAY too much like the Joker. I think of Lex Luthor as being too smart for his own good so he is super cocky, not crazy.  This bothered me.. the Joker mannerisms.

Everyone needs to remember going into this film is that it's dark.  It's a dark Batman.  The Batman of Frank Miller's imagination. The problem with this in the movie is that the average movie goer isn't going to understand this.  Why is Batman now killing?  Why is he so dark?  Comic book readers know.  The movie shows a Wayne Manor burned down... a Robin costume destroyed by Joker but we get no backstory.  Movie watchers are supposed to just guess something bad happened and changed Batman.  I liked it... but will the everyone?

Obviously I have a lot of theories of future movies... but that would be a ton of spoilers so I'll leave it there. Really the movie just has pacing issues but otherwise for those who love superheroes and DC comics you will love it.  It is a good time... though the movie clocks in at 2.5 hours.  Enjoy it for what it is.

I give the movie a B
Posted by Angela's Anxious Life at Saturday, March 26, 2016