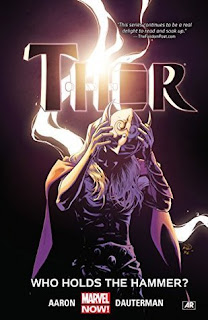 I really enjoyed the first volume of the new Thor.  This volume though was just way short.  I found out who the new Thor is through a spoiler from the comments on my review of Thor Vol. 1. So, I wasn't too surprised when she was unmasked. Dang spoilers.  Anyways.... there were only I think three issues from the main Thor story.  If you don't want to know who the new Thor is stop reading now.  So we come to find out Jane Foster has taken the title of Thor.  I may have enjoyed that more if I could stand her character in the movies... but I just don't.  It is apparent the comic has taken her in a different direction but I've never read Thor before now but she seems to a likable character in the comic.  After this little story line finishes there are three other stories from the world of Thor thrown in.  Not sure what those had to do with anything.  There was a funny story about Thor (the male Thor) out drinking people including the Devil.  I don't think I'm going to continue on in this series though.  This volume just didn't do it for me.  For one thing not enough actual story to the comic... way too short to be collected in a volume.
2 out of 5 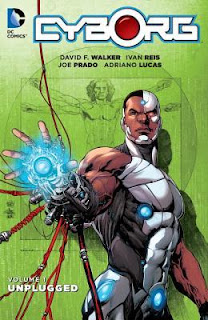 I love Cyborg... but he seems to always be a background character.  So when I saw the library had this on order I knew I had to read it.  Well... the comic isn't what I expected with Cyborg.  Vic Stone/Cyborg's robotic powers are evolving.  So ... he's not exactly the Cyborg we know.  He's trying to learn and figure out what is happening to him.  There is this group called Technosapiens who come to earth to absorb humans... so of course we have a team up with some Metal heroes (which I haven't heard of before but Cyborg knows them???). There was an interesting part where Vic Stone was having some inner dialog... he was talking about how people wonder if he eats, goes to the bathroom, sleeps and even if he has sex.  He does answer these questions so that was a good insight into his character.  I had issues with this comic when we got the whole different dimension added in.  Ughhhh I hate when in order to get a plot going we throw in other Earths.  This volume does cover humans who start to go on the black market and use the technology used to fix Cyborg in the first place and I thought that was a good issue to cover.  Why can't people missing limbs use this technology too.  Why is it saved for only superheros??
3 out of 5 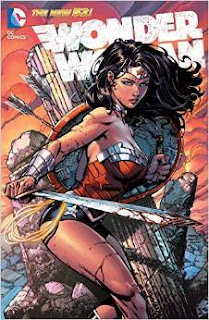 I love the Wonder Woman series so much.  What I really liked about this volume is that it takes the many story lines we have going on in the New 52 and tries to streamline them.  Honestly the comic really needed that.  Originally Wonder Woman's comics were having nothing to do with crossovers.  So we just got the story of her dealing with her Greek background.  I loved it.  Then we did start to get some crossover, she is God of War now, she is apart of the Justice League, she is dating Superman, she is trying to be queen of the Amazons.  A lot of plots which must've been hard for the new writer to handle.  The artist has changed and that was the hardest part about this comic for me.  I really really loved the art in the first 6 volumes (see below what WW looked like in the first 6 volumes).  The artist really added to the Greek feel.  I will say though that the new artist does bring Wonder Woman out of the Greek heavy story line.  I think this volume kind of clears the way for Finch (the new author) to take the story in her own direction next volume. 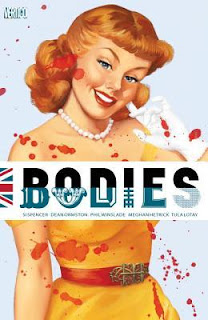 I don't even know what I just read!  I mean... confusing.  So this comic has four stories taking place in different time periods about unsolved murders.  I love the cover.  So pop-art. I remember seeing this around goodreads and blogs.  So I finally made the time to read it. The times periods are 1890, 1940, 2014, and 2050.  The 2050 story completely confused me.  I have no idea what people were saying or doing.  It was like gibberish. I almost feel like I wasn't smart enough to get this book. Reading this comic was seriously a chore.  I am pretty sure all these murders were supposed to be linked through time but who knows??? I didn't care about any of the characters... there were a few sex scenes thrown in for shock I'm guessing.  To try to make this comic more daring then they were already trying to make it.  Didn't work. I just want my time back! I can barely put into words my dislike for this comic.


This counts for 42 comics towards my 2016 Graphic Novels Challenge.