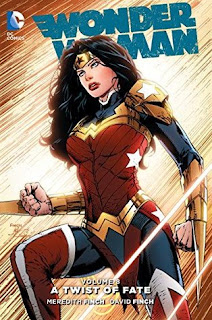 I love Wonder Woman in the New 52.  Yeah, I've said that before.  There is a big costume change as you can see on the cover over there.  Wonder Woman is always getting a costume makeover these days. No one wants her too girly, too slutty, to manly, I mean the old school costume was just fine. Donna Troy is the villain from the previous volume.  What I like about her is she is pretty much the same as Wonder Woman but darker.  More finishing up plots here.  Wonder Woman is the God of War, she is apart of the Justice League, she is queen of the Amazons. Strife has turned out to be one of my favorite characters in the series.  She is such a troll.  She gets Troy to break out of prison and just laughs about it. She pretty much convinces Troy to go to the Fates to get her life string cut only to find out she doesn't have one!!! I wish the Fates had been drawn a little better.  Overall... I love that the mythology is still here in the comic. I'll be sad when rebirth comes around in volumes because I'm sure they'll take Wonder Woman in a new direction.
4 out of 5 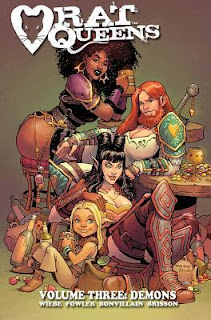 I love the Rat Queens soooo much!  This comic series is really amazing.  Especially if you like fantasy and adventure type stories. I love the all female cast of character that run around in an adventuring company. I did just read that this comic would be continuing as a webcomic.  UGHHH... I don't know if sales were just really down or what.  I know there has been a lot of controversy with the artists and writers.  Pushing each other out, arrests, so much drama behind the scenes. I don't know how I feel about the whole webcomic thing?  I mean.... is it going to be free?  I get these from the library so I'm wondering. The new artist does draw the girls way more sexual, but that happens in DC Marvel comics too.  I enjoyed this comic but I'm not going to continue in this series if there are no more issues that we know are going to come out for sure.  It's unprofessional to me and awful for the readers to have to deal with it as well.  I feel like the publisher should've nixed this in the butt sooner.
3 out of 5. 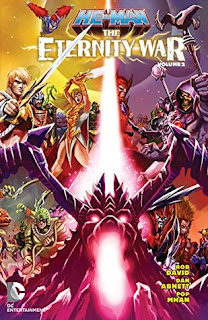 I'm sad that the He-Man DC run is done.  I really enjoyed it.  I thought this would a good ending to the series.  Nothing was left up in the air.  Skeletor finally becomes the villain he should be. I was getting tired of him not really having a big presence. Finding out more about Skeletor's past was so interesting to read.  I love a good villain backstory. Skeletor claims he is going to take Hordak's power and save the universe. This comic kind of leads into a possible She-Ra series.  The Crystal Castle is shown for She-Ra to be the queen of this castle.  I loved to see it. Swift Wind is in this comic as well and is as loyal to She-Ra as expected. OK.. I'm a She-Ra fan girl. I suppose there just wasn't enough fan base to keep these comics going.  I look on goodreads and there aren't a lot of reviews.  He-Man is a fantastic comic series though and I recommend it to everyone who likes fantasy.  Though the Eternity War did drag a little... went on a little too long.  Sorry to see that this is the end of it. 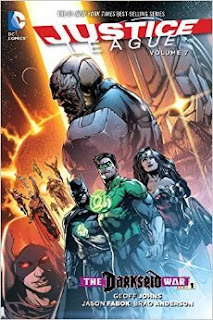 Justice League to me has been one of the top comics that came out of the New 52.  So Mobius wants war with Darkseid, saying the New Gods are dead (I think the New Gods are from Convergence??).  So this is why Mobius and Darkseid want to fight each other.  I guess...  Then the Justice League joins because the battleground is going to be Earth! There's a couple side stories squeezed in.  Superman and Lex Luther get boomed somewhere and have to figure out how to get back together.  Batman and Green Lantern get stuck together and I think that it's hilarious.  Their banter is funny. No Aquaman in this volume... um... guess he's doing his own thing. The art is something I love... Justice League has been able to keep great artists on board. This is the type of comic you are either going to like or don't like.  Either you like huge epic battles or you don't.  I am glad this isn't some huge crossover event and it's all taking place in the Darkseid War arc.

This counts for 49 comics towards my 2016 Graphic Novels Challenge.