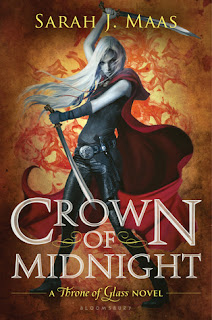 From the throne of glass rules a king with a fist of iron and a soul as black as pitch. Assassin Celaena Sardothien won a brutal contest to become his Champion. Yet Celaena is far from loyal to the crown. She hides her secret vigilantly; she knows that the man she serves is bent on evil. Keeping up the deadly charade becomes increasingly difficult when Celaena realizes she is not the only one seeking justice. As she tries to untangle the mysteries buried deep within the glass castle, her closest relationships suffer. It seems no one is above questioning her allegiances—not the Crown Prince Dorian; not Chaol, the Captain of the Guard; not even her best friend, Nehemia, a foreign princess with a rebel heart. Then one terrible night, the secrets they have all been keeping lead to an unspeakable tragedy. As Celaena's world shatters, she will be forced to give up the very thing most precious to her and decide once and for all where her true loyalties lie... and whom she is ultimately willing to fight for.

I am really enjoying this series. I am so happy to be reading a series where all the books are out! YES! I think this book series is so addictive.  The way Maas does world building is fantastic. So this book picks up immediately where the last book ends.  Celaena is now the King's Champion and so she has to do what he says. She not only has that to worry about but also the Wyrdmarks.  There is of course a little love drama. Chaol, Dorian and Celaena are kind of a love triangle.  I like how the author just nips it in the butt and it's not an annoying love triangle.  Nehemia is an amazing character in this book.  She is so strong and what Celaena should be.

One thing I  liked about this book was that we get to explore a little bit more or Celaena's past.  Not too much.  But enough.  Some of her past I didn't totally expect which is something I really really enjoy.  I love to be surprised when I read.  I had no idea what was going to happen in this book.  The previous book had a straightforward plot.  We knew Celaena needed to be the champion and win. But then ... nothing.  So when this book started I was excited to see what were her missions going to be. I also like how flawed the characters are.  They all make mistakes.  Things they wish they hadn't done, or actually don't have a problem with the choice they made.  This book does a good job of making the reader hate the villain, the King of Adarlan. One character that did not get enough page time is Mort.  An ancient talking doorknob. I really wanted more from him.

This is a decent sequel.  Sometimes series suffer from second book syndrome where it is really just a filler book. Crown of Midnight really moves the story along.  I am pretty much almost done with book three so be sure to look for that review soon.

Reviews of other books in the series:
Throne of Glass by Sarah J Maas
Posted by Angela's Anxious Life at Monday, September 26, 2016