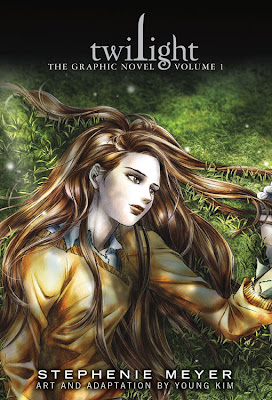 Twilight: The Graphic Novel by Stephanie Meyer
Goodreads description:  When Isabella Swan moves to the gloomy town of Forks and meets the mysterious, alluring Edward Cullen, her life takes a thrilling and terrifying turn. With his porcelain skin, golden eyes, mesmerizing voice, and supernatural gifts, Edward is both irresistible and impenetrable. Up until now, he has managed to keep his true identity hidden, but Bella is determined to uncover his dark secret...
So I enjoyed this graphic novel.  I love to read this type of literature so when I found out Twilight was made into a graphic novel I wanted to check it out! It does not finish the first book, maybe about half the book.   So as far as I know Twilight the book will be two graphic novels so I am assuming all the books will be two graphic novels.  Though it seems that only one graphic novel will be published a year so that could mean 2017 they will be done with them?  WOW!  Hopefully the publisher starts publishing at least two a year.
The art work is beautiful so that is what I loved the most.  I tried to look up some information on the web about Young Kim, who is the illustrator for the graphic novel and could barely find anything!  I guess this is his first Manga.  Oh and by the way.... this book is Manga to me, not a graphic novel.   Ok so this brought up a debate for me in my mind... what is the difference between Manga and a Graphic Novel?  I find myself a graphic novel reader rather then a manga reader.  As I understand it, Manga is  is primarily used in English-speaking countries solely to describe comics of Japanese origin.   And a graphic novel is typically bound in longer and more durable formats than familiar comic magazine, using the same materials and methods as printed books, and they are generally sold in bookstores and specialty comic book shops rather than at newsstands (wikipedia definitions).  So to be honest I am totally confused because Young Kim's Twilight won for Manga of the year in 2010.  EEK!!!
Well hope that wasn't boring!  I would recommend this if you like graphic novels or if you like Twilight!