The Night Circus by Erin Morgenstern-Review 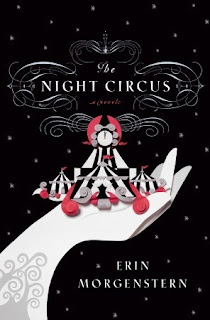 The Night Circus by Erin Morgenstern
Picked up this book because I could see that everyone was reading it and it was mentioned in my Entertainment Weekly magazine.  Plus the cover is amazing.  Here is the goodreads description:


The circus arrives without warning. No announcements precede it. It is simply there, when yesterday it was not. Within the black-and-white striped canvas tents is an utterly unique experience full of breathtaking amazements. It is called Le Cirque des Rêves, and it is only open at night. But behind the scenes, a fierce competition is underway—a duel between two young magicians, Celia and Marco, who have been trained since childhood expressly for this purpose by their mercurial instructors. Unbeknownst to them, this is a game in which only one can be left standing, and the circus is but the stage for a remarkable battle of imagination and will. Despite themselves, however, Celia and Marco tumble headfirst into love—a deep, magical love that makes the lights flicker and the room grow warm whenever they so much as brush hands. True love or not, the game must play out, and the fates of everyone involved, from the cast of extraordinary circus per­formers to the patrons, hang in the balance, suspended as precariously as the daring acrobats overhead. Written in rich, seductive prose, this spell-casting novel is a feast for the senses and the heart.

This book is a great story.. the descriptions of the circus are magical.  I just love how I really felt that I was in each circus tent.  I could see myself in the Ice Garden.  The love story was good as well.. but I wish that the author had went into it just a little bit more. My only other problem was that there was no magician's duel.  It made it sound like there was going to be, but then it was just one magician making a better tent then the other.

I will also admit that I got a little confused with the time frames in the book and eventually had to go back and start checking the dates on the beginnings of the chapters.  The telling of the story was told to us  by one character telling another character what happened. So sometimes that got confused because it kept jumping from past, present and future.  So I had to pay close attention. 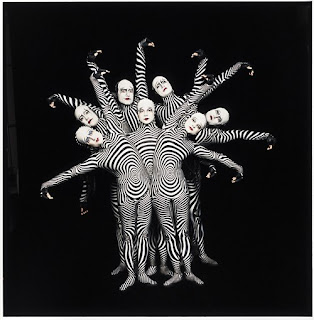 I do think though that the book was very magical and worth reading if you are tired of the same old stories... girls loving boys, vampires and the supernatural, and similar books.   I love that we are taken on a great descriptive journeys through magic.  The author does very well with describing even the littlest details of the circus.. the fact that everything is white, black or red only.  And even the clock in the story is one of the most magical pieces.  I almost gave it 4 cats... but the slow start made me give it three cats!!  Enjoy this book!

If you haven't been to a Cirque De Soleil show you must go... that is what this book made me think of.  I've been to the Mystere show in Las Vegas and it was amazing and out there and magical like this book!  Here is a pic from the end of the show! 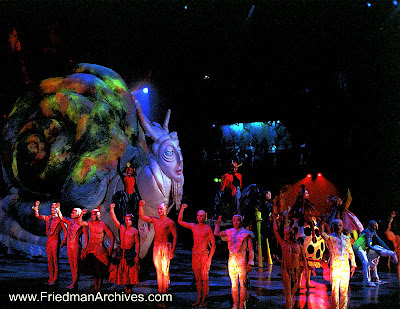