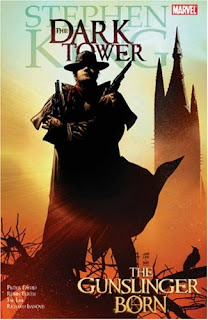 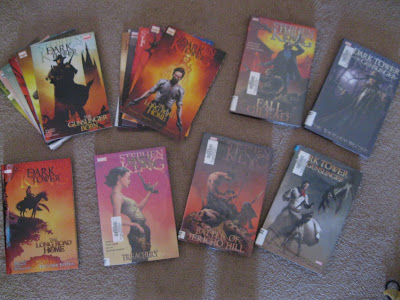 Well as we all know I love Stephen King... I even run a fan group for him on goodreads...  Stephen King Fans .  I have been wanting to read all the graphic novels for a long time.  When the first started coming out I went up to the comic book store every time a new one came out and bought it.  But then it started to get pricey and I got lazy.  Well now they are all out!!  AND even better my library has all of them.  Only problem that I discovered is that the graphic novel hard cover (which consists of all the comics in an arch) doesn't include the really interesting supplemental information that is contained in the back of a comic book.  And as all Stephen King fans know... that is vital information when it comes to the dark tower.  Here is a look at the back of one of the comics: 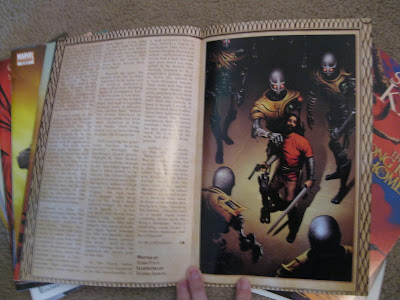 As you can see it is a ton of reading... and lots of information missed.  I am not sure why it isn't included in the hard covers?  Perhaps to get you to go out and by the comic books?   I would review each book but I thought it would be better (and less boring to those who don't read King) to review the whole series.  For those who have read the Dark Tower series these are a must.  They have soooo much back story to Roland and his Ka-tet!!

So there are 5 books in the Dark Tower comics... and to my surprise there is now a Gunslinger series too!!!  The library had two of the those but is missing the 3rd one so I requested them to order it.  I am now looking forward to reading King's graphic novels for his books The Stand and the Talisman.  Here is a better look: 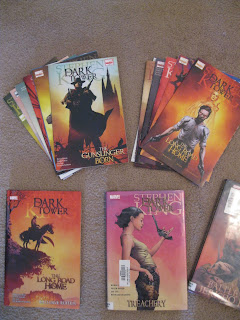