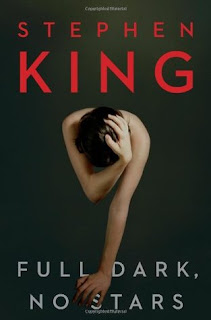 I love Young Adult books but for those that follow me you know I also love Stephen King!  I read this book because it is the book club read for the month for my Stephen King Fans group.  Here is the goodreads description:


A new collection of four never-before-published stories from Stephen King. 1922 The story opens with the confession of Wilfred James to the murder of his wife, Arlette, following their move to Hemingford, Nebraska onto land willed to Arlette by her father. Big Driver Mystery writer, Tess, has been supplementing her writing income for years by doing speaking engagements with no problems. But following a last-minute invitation to a book club 60 miles away, she takes a shortcut home with dire consequences. Fair Extension Harry Streeter, who is suffering from cancer, decides to make a deal with the devil but, as always, there is a price to pay. A Good Marriage Darcy Anderson learns more about her husband of over twenty years than she would have liked to know when she stumbles literally upon a box under a worktable in their garage.


This was a great short story collection. Very dark. Though I will say that I was a little ticked to find out that the paperback copy has a 5th story that the hardback edition does not have. What a money ploy!!  And King makes enough money to not have to do this.  So I guess I won't be discussing this story in my group.  I love the title of this book too.  So descriptive and enticing.

The story called A Good Marriage was so suspenseful I had to actually take a break from it one night and finish it the next night and I never do that.  I am not sure about the cover of this book though.  What is going on there?  She almost looks like she is in a bathtub stretching out but that has nothing to do with the story at all!!!  If you love King pick this up.. but be ready for Uncle Steve to take you on a long creepy ride!!

The following image is from the special edition of the book.. there are a few and they are really cool!!  Here is a link to see more of the pictures: Full Dark, No Stars pictures 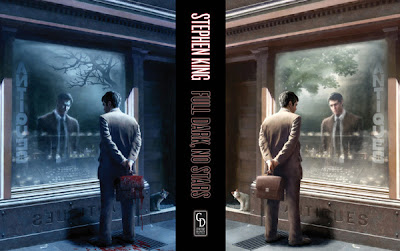