The Goddess Test by Aimee Carter-Review 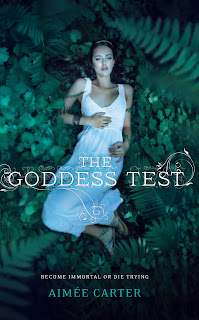 The Goddess Test by Aimee Carter

I read this book for my Young Adult Book Club .  And the author Aimee Carter, will be stopping by the group for a Q&A !!  Here is the goodreads description:

It's always been just Kate and her mom—and her mother is dying. Her last wish? To move back to her childhood home. So Kate's going to start at a new school with no friends, no other family and the fear her mother won't live past the fall. Then she meets Henry. Dark. Tortured. And mesmerizing. He claims to be Hades, god of the Underworld—and if she accepts his bargain, he'll keep her mother alive while Kate tries to pass seven tests. Kate is sure he's crazy—until she sees him bring a girl back from the dead. Now saving her mother seems crazily possible. If she succeeds, she'll become Henry's future bride, and a goddess.

I thought this was an OK book. Not great.. but not bad either. I guess what makes it hard to read is that the mythology in it is so different then the mythology we like and love.  The gods are so nice... not evil really at all.  And the tests are the seven deadly sins.  Which obviously is Christian and has nothing to do with the gods.  I thought the tests were going to be bigger challenges.. but in the end they were simple little tasks.  The romance in the book was good.  In fact I thought this read more as a romance then a paranormal book.

The one thing I liked about the book was the main character Kate.  She is great and independent.  Not too much whining which you find with a lot of these books anymore from the main female character.  One thing I thought was kinda funny in the book was the sex.  First off the word was never said it was always "that".  Like it was some forbidden subject!!  Kinda funny.  Anyways... if you are looking for a light-hearted read and nothing serious about myths then this is a good series.

And if you haven't seen the Disney movie Hercules you really should... it is a totally underrated Disney movie!!