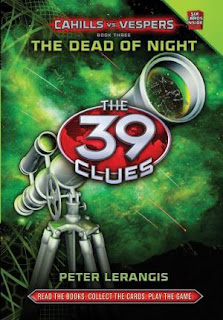 I just love this series!  Dead of Night is the third book in the Cahills vs. Vespers series.  Here is the goodreads description:

The Vespers have crossed a line. Amy and Dan were devastated when the Vespers kidnapped seven Cahills around the world, holding them hostage until Amy and Dan delivered an impossible ransom. But at least the hostages were Cahills - members of the world's most powerful family, trained to face all odds. Now the Vespers have gone too far. They've kidnapped Atticus, an innocent 11 year old boy and Dan's only friend. Now Dan and Amy are in the struggle of their lives. Because if they can't outwit the Vespers, the unthinkable will happen . . . Atticus will die.
Next up is a Major spoiler from the whole series.. I will mark when the spoiler is over!! Spoiler: I still couldn't believe that Arthur Josiah Trent is, **gulps** (WARNING! SPOILER!) is Vesper One. Is this for real? What a twist!
END Spoiler

Not sure what I think about Dan becoming the villain?  I mean since he is collecting all of the 39 ingredients what will happen when he takes the serum?  I just can't wait for the next book.  I never really try to figure out the clues in the books.  But here are the ones from this book:
That is one of the things I love about these books are the covers.  And ever cover includes some type of puzzle!