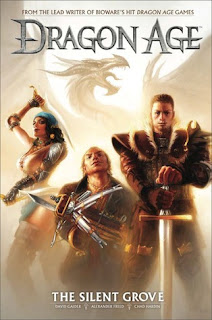 I received this as an ARC through Dark Horse Comics from netgalley.com, Thanks guys!

Here is the goodreads description:


Dragon Age #1–#6, previously available only on the Dark Horse digital store! It's unusual for a king to embark on a dangerous quest himself rather than send emissaries, but King Alistair Theirin has caught wind of a rumor big enough, and personal enough, that he is compelled to investigate. With the deadly pirate Isabela and underworld merchant Varric Tethras by his side, Alistair travels to Antiva - the nation of assassins - to learn the fate of his long-lost father, King Maric. There, they will engineer a prison break, battle an assassin prince, encounter the mysterious Witch of the Wilds, and uncover the secret history of dragons

I thought this graphic novel was OK.  I have played both Dragon Age 1 and 2.  I didn't care for the map of two.  We were in the same places over and over.  But I did like the characters.  I must say I was surprised that Alister hung out with Varric and Isabela on a journey.  I mean they weren't even in the same games!!


I was going to read it on my Nook but whenever I read graphic novels on it I have a hard time reading the words because they get real blurry so I just read it through Adobe reader on my computer.  It's nice I can read it either way.


Also I looked up this Dragon Age graphic novel on goodreads and discovered there are sooo many Dragon Age novels!!  Very surprising to me.  This one is the first one I had heard of for the game.