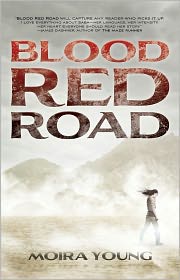 I just finished Blood Red Road by Moira Young for my Young Adult Book Club .  Here is the goodreads description:

Saba has spent her whole life in Silverlake, a dried-up wasteland ravaged by constant sandstorms. The Wrecker civilization has long been destroyed, leaving only landfills for Saba and her family to scavenge from. That's fine by her, as long as her beloved twin brother Lugh is around. But when a monster sandstorm arrives, along with four cloaked horsemen, Saba's world is shattered. Lugh is captured, and Saba embarks on an epic quest to get him back. Suddenly thrown into the lawless, ugly reality of the world outside of desolate Silverlake, Saba is lost without Lugh to guide her. So perhaps the most surprising thing of all is what Saba learns about herself: she's a fierce fighter, an unbeatable survivor, and a cunning opponent. And she has the power to take down a corrupt society from the inside. Teamed up with a handsome daredevil named Jack and a gang of girl revolutionaries called the Free Hawks, Saba stages a showdown that will change the course of her own civilization. Blood Red Road has a searing pace, a poetically minimal writing style, violent action, and an epic love story. Moira Young is one of the most promising and startling new voices in teen fiction.

I thought this book was good but not my favorite distopian that I have read lately. But I still enjoyed it. It was very slow for me though when I first started it. I'm not sure why.. the story was moving along just fine but didn't take off for me until after Hopetown. 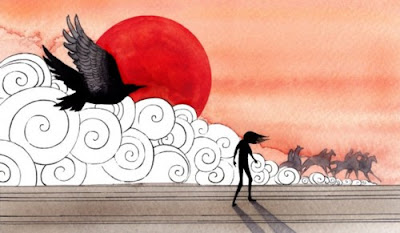 I will read the next book. I am interested in what happens to everyone. Though I did think the end was odd with Jack just leaving without saying goodbye and then Saba having to have to chase him down. That part was a little dramatic for me. Who leaves without even saying bye?

Also, I read this about the names used in the book: Lugh is an extremely appropriate name--he is a Celtic god/mythological hero, often associated with the sun. Maev and Epona are also goddess names. So that is interesting. Don't know if Saba and Nero mean anything?


I am quite curious about the movie now. Ridley Scott picked it up?? That's pretty big. Of course sometimes it takes forever for a book to actually become a movie, just because the rights were purchased doesn't mean this will actually happen.

The no quotation marks in the book drove me nuts!! I had to re-read a lot of lines because of this. Ms. Young did stop by the YA Book Club for a questions and answers session .   She said this about the no quotations:  " My failed attempts to tell Saba's story conventionally over a period of more than three years forced me to start all over again, with a blank sheet of paper. As I sat there, not knowing what to expect, only knowing that I had to get out of my own way and stop thinking so much, Saba began to speak. Clearly, directly and really very much as you see it on the page in the finished book. I could hear her voice in my head.

I tried to feel the rhythms and arcs in the simplicity of the language in order to urge the story on, so that the language of the book and the way it appeared on the page would match the pace of the story. So that we'd feel the sharp urgency of Saba's quest and how she is feeling inside.

That's also why I chose not to use quotation marks or closed word endings. I wanted the reader's eye to move across the page without interruption and without the insertion of a narrator (which quotation marks do). My main aim was to write a page-turner that would be hard to put down and I wanted the language to be part of that."

I will read the next book and am looking forward to it's release! 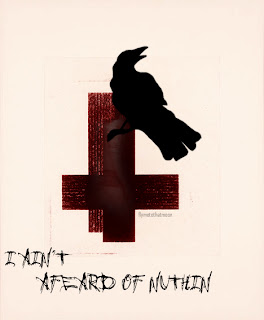 Here is my review of book 2 Rebel Heart by Moira Young.
Posted by Angela's Anxious Life at Monday, June 18, 2012