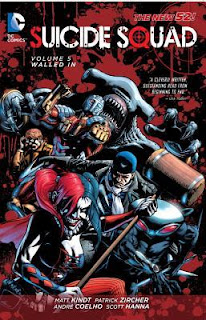 I really like this series so I am sad this is the last one.  Though.. they oddly revamped it (see the following review).  This issue basically is about Amanda Waller.  It takes place during the whole Forever Evil thing going on (Crime Syndicate). This must be hard for the authors because they are trying to explain to us what exactly went on in other comics and at the same time coming up with a new story. So we read a lot about the Reverse Suicide Squad coming in.  No one knows who the boss is so both teams are confused. I don't know why this is a final volume.. when I went to read volume 1 in the new Suicide Squad it seemed they wanted to get rid of some characters and keep others on the team.  I don't know why they couldn't just do that in volume 6. But instead they move everything to a new series.  Huh.  Well 3 out of 5 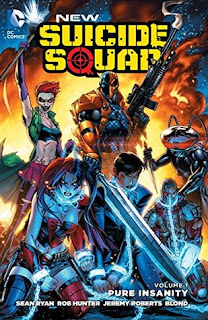 The "New" Suicide Squad was provided to me free of charge from Edelweiss and DC for an honest review.  I would like to thank them for providing me with a copy. Honestly... I really loved the first Suicide Squad series so I was a little nervous about this revamp.  There are a lot of team members coming in and out in this comic.  A new boss of the team instead of just Amanda Waller. Two new members are Joker's Daughter and Deathstroke.  Joker's Daughter is only in this comic for a short time, and I don't really understand her character.  She found Joker's face and wears it and tries to be crazy like him. One thing that really surprised me in the comic was that it takes place overseas.... China, Russia.  I don't know but it just didn't work for me. I really love seeing Harley Quinn in action.  She is fun.   I am not sure which comic series will influence the new movie??  Art work is amazing in this comic .. Amanda Waller is suddenly all sexy.  I give this 4 out of 5 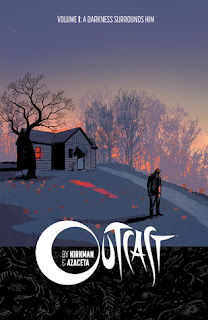 I had seen this comic reviewed on a few blogs so when I saw it was available at my library I had to read it.  I went into it not knowing anything.  For one thing I had no idea that the author also writes the Walking Dead.  The comic is about Kyle who has been haunted by demons his whole life.  Most of his family becomes possessed. Kyle keeps being called Outcast by the people he knows who are possessed. By the end of this volume we don't exactly know what Outcast means which is a little too bad.  One thing about the comic I felt was there wasn't a lot of story. I wanted a little more from the first volume.  The story was sometimes just thrown together and I had to figure out what was going on.. this volume seems to just start in the middle of the story. There is an example below of the confusing dialog.  I think I am going to skip the next volume even though it is an intriguing story.  2 out of 5 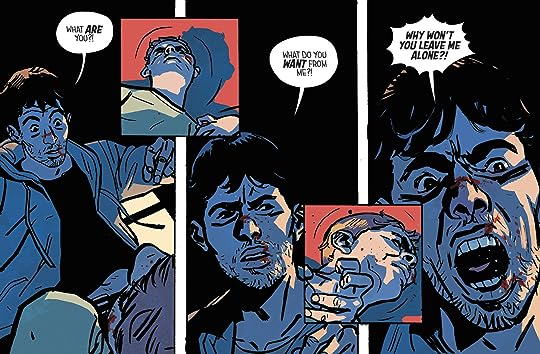 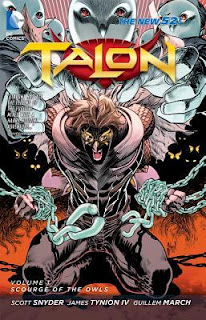 I loved the Court of Owls arc that came out a few years ago.  It was super super good.  So when I found out about the Talon comics I was really really interested in reading them.  Vol 1 is pretty good but very different from the Court of Owls series.  This series no longer has all the dead Owls coming back.  It takes place after that night.  Calvin Rose is a previous Court of Owls member who escapes and gets away from the group.  Of the night of the Owls coming out and Batman getting involved Rose things the Owls are vulnerable so he tries to go after them and finish off the remaining members (Batman does pop in and make an appearance). The villains in this comic are great and actually look scary.  I enjoy learning the history of the Court of Owls and finding out what they are up to today.  Will for sure be continuing this series.  4 out of 5


This counts for 36 comics towards my 2015 Graphic Novels Challenge!!