This issue I talk about Birds of Prey vol 5, Rat Queens, OZ: The Emerald City Vol 6, and Superman Vol. 5 Under Fire. 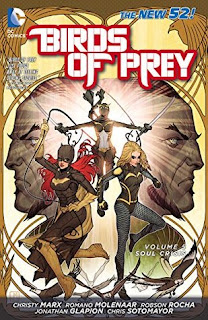 I loved this series... it's another one though that DC is cutting out of the New 52 line up.  In this book we find out that Black Canary's husband might live.. IF she teams up with Ra's Al Ghul.   Suicide Squad shows up in this issue and of course that part was fun (I love them). Lots of other stories put into this issue to tie things up.  Batgirl is having issues still from the Death in the Family story line... of course they are actually tying up her story since she gets a reboot after this comic. The comic has a Future's End story included at the very end of the book. After reading this comic I feel like Birds of Prey was just pushed to the side since they knew it was ending. I would only recommend this comic for those who have read the New 52 series and want to finish off the Birds of Prey. 2 out of 5 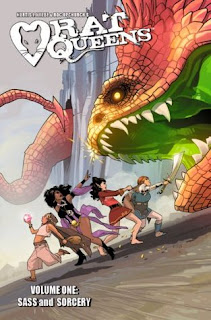 I am so glad I read this comic (thanks to the recommendation from Where the Reader Comes to Write).  This comic was right up my alley.  For those that don't know I play Dungeons and Dragons with friends at least once a week.  This comic totally reads like I was playing an RPG or a game like D&D. Hannah the Rockabilly Elven Mage, Violet the Hipster Dwarven Fighter, Dee the Atheist Human Cleric and Betty the Hippy Smidgen Thief are the characters that we get to follow and boy are they great!  I am so glad this comic got buzz or I may have never discovered it.  I put volume 2 on hold right away. The humor in this book actually made me laugh out loud a few times.  The art is fantastic too.  Thereare swear words and some sexual content and what not in this comic... so if that bothers you then yes skip this (though you will regret it).  5 out of 5 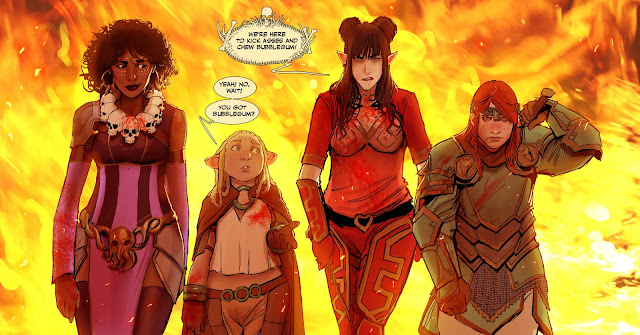 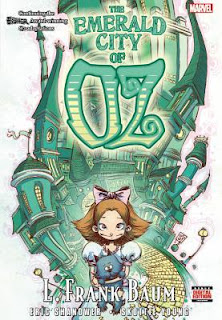 I started reading the Marvel OZ series a few years ago when I did a big event here on the blog for the Wizard of OZ.  It was a pretty fun month.  After the event I continued reading these comics.  The art has been fantastic all along as well as the writing.  The comics follow the Baum books really well. I like that we get to see a lot of the characters from all the previous comics. Dorothy travels around in this book to different towns meeting different groups of characters who are just charming. This book is were Baum was actually going to end the OZ series so it is fitting that Shanower also ends here. These comics make me want to read the entire OZ series, but too many books too little time.  I hope to see more comic adaptations between Young and Shanower again.   I would recommend this book to everyone who loves OZ.  5 out of 5 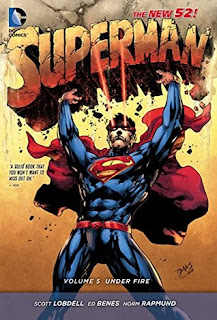 Next up I read Volume 5 of Superman.  Superman has a few different comic series out there but not quite as many as Batman so I've been able to stay pretty caught up.  The whole Wonder Woman/Superman love story is apart of this comic with Lois being Clark's best friend.  We all know men and their exs can't be best friends so we'll see where that goes. Clark is still working on that blog instead of at the Daily Planet.  Lois has become some sort of minion for Doomsday and now Superman is also becoming a minion.  The comic continues in Superman Doomed so I am not sure if the Superman comics are now going to be canceled. I just looked and found that there is a Superman The Men of Tomorrow that just came out this month.  Is this vol 6??  I don't know.  Damn you DC for confusing me.  This is a strong series for Superman I just want them to write Lois out of it and this was a confusing book.  There are just too many stories from other comics so this book never gets it's own good story.

This counts for 40 comics towards my 2015 Graphic Novels Challenge!!