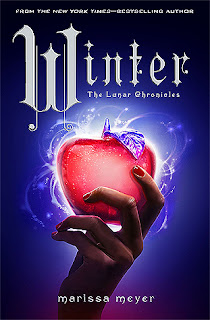 Princess Winter is admired by the Lunar people for her grace and kindness, and despite the scars that mar her face, her beauty is said to be even more breathtaking than that of her stepmother, Queen Levana. Winter despises her stepmother, and knows Levana won’t approve of her feelings for her childhood friend—the handsome palace guard, Jacin. But Winter isn’t as weak as Levana believes her to be and she’s been undermining her stepmother’s wishes for years. Together with the cyborg mechanic, Cinder, and her allies, Winter might even have the power to launch a revolution and win a war that’s been raging for far too long. Can Cinder, Scarlet, Cress, and Winter defeat Levana and find their happily ever afters?

I had been waiting for this book forever!  Well probably not as long as most people since I only read this book series for the first time last year but it felt like a long time. When reading this book as an ebook I had no idea that it was as long as it is.  800 + pages.  It really didn't seem that long.  One thing I was most excited for in the book was that all the characters were going to finally be together in one book.  I wasn't disappointed either.  Such a great bunch of characters. Great friendships and no love triangles (claps hands).  Meyer's writing is just so great.  Character development, world building, and all that jazz.

I love fairytale retellings so that might be another reason why I love this book series.  This one obviously had more Snow White aspects to it.  The title character in this book Winter is a little crazy. I kind of liked that though... it was almost like she was representing a community of people with mental illness.  I saw a lot of people complain about this book being called Winter but that Winter isn't in it very much.  Honestly if this is the last book in the series I feel like everyone should've expected that it would end with all the characters ending up together.

I do have issues with how the villain Levana was defeated.  This is a spoiler so if you are avoiding spoilers skip to the end of this paragraph.  She was traumatized by the fact that everyone got to see her uglyness .. her scars. Next thing you know the people of Luna didn't like her anymore and she got week by knowing that.  Meh.

It really was a great series.  I enjoyed it so much.  There are only a couple of people I've met who didn't like Cinder (shocker).  I have the next book on hold... Stars Above.  I also just found out there are two short stories that go with this book I hadn't read before so I am going to go out and hunt for those.  Great ending! I hear that Meyer's next book is about the Queen of Hearts from Alice and Wonderland when she was a young teen.  Can't wait!