Stars Above by Marissa Meyer 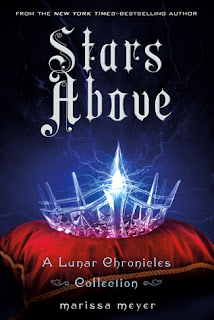 
The enchantment continues.... The universe of the Lunar Chronicles holds stories—and secrets—that are wondrous, vicious, and romantic. How did Cinder first arrive in New Beijing? How did the brooding soldier Wolf transform from young man to killer? When did Princess Winter and the palace guard Jacin realize their destinies? With nine stories—five of which have never before been published—and an exclusive never-before-seen excerpt from Marissa Meyer’s upcoming novel, Heartless, about the Queen of Hearts from Alice in Wonderland, Stars Above is essential for fans of the bestselling and beloved Lunar Chronicles. -- The Little Android: A retelling of Hans Christian Andersen’s “The Little Mermaid,” set in the world of The Lunar Chronicles. Glitches: In this prequel to Cinder, we see the results of the plague play out, and the emotional toll it takes on Cinder. Something that may, or may not, be a glitch…. The Queen’s Army: In this prequel to Scarlet, we’re introduced to the army Queen Levana is building, and one soldier in particular who will do anything to keep from becoming the monster they want him to be. Carswell’s Guide to Being Lucky: Thirteen-year-old Carswell Thorne has big plans involving a Rampion spaceship and a no-return trip out of Los Angeles. The Keeper: A prequel to the Lunar Chronicles, showing a young Scarlet and how Princess Selene came into the care of Michelle Benoit. After Sunshine Passes By: In this prequel to Cress, we see how a nine-year-old Cress ended up alone on a satellite, spying on Earth for Luna. The Princess and the Guard: In this prequel to Winter, we see a game called The Princess The Mechanic: In this prequel to Cinder, we see Kai and Cinder’s first meeting from Kai’s perspective. Something Old, Something New: In this epilogue to Winter, friends gather for the wedding of the century..

Some of you may have noticed I haven't posted a book review in a while.  It was this book that kind of gave me the burn out.  I started to write the review for this book and just didn't know what to say. Not that the book was bad or anything but just I had nothing to say about it.  I hadn't run into a book yet that I just really had nothing to say about it.  So maybe this book was really just middle of the road for me.

I'm a little sad that this is the last book in this series, but at the same time I'm glad. I like when a series actually ends and doesn't go on and on and on (I'm looking at you Stephanie Plum).  This book is full of short stories.  I love short stories.  They are like a break from long novels.  I don't always love when an author wraps up characters nicely.  Sometimes you should just finish a novel and leave it.  JK Rowling keeps trying to wrap up Harry Potter and I'm like it's done.. leave it!  These short stories are actually pretty good.  Some not so relevant to whole overall arc of the series so those maybe could've been left out.  I'll do a short review on each story:

The Keeper:
This story is about Michelle Benoit and how she ended up being the caretaker of Cinder. We also learn more about how Scarlet comes to live with her.  Really a great background into this whole part of the story.  I often wondered about the way Scarlet comes to stay with her grandmother.  Though it is a little surprising she never discovered Cinder.

Glitches:
This story focuses on Cinder and when she first arrives to live with Adri and the family.  This one could've been just left up to the reader's imagination.  It is interesting to read about Cinder not remembering anything from her past but I didn't think it needed a whole story of it's own.  I suppose it was to make the reader feel bad for Cinder and how she grew up but I think that was explained enough in the main stories.

The Queen's Army:
This story is about Wolf and how he ends up in the queen's army.  It was really touching to read about his family, especially his brother.  Now this story about the sad background of a character was totally worth the read, unlike Cinder's story.  Wolf's background wasn't exactly touched on in the main series. I do think siblings always compete with each other whether they mean to or not, but to compete to a level where you really dislike the sibling is just sad.

Carswell's Guide to Being Lucky:
This was my least favorite story in the series and I really didn't see how it related to the whole overall series.  It's about Captain Carswell being basically a player in high school.  He ends up falling for a girl who is a little nerdy.  The most important part of this story I suppose is how much pressure Carswell's dad puts on him to do well in school.  Which eventually causes Carswell to rebel.  I knew some people in high school like this.  Their parents kept them so sheltered that once they were able to do what they wanted, they ended up going way to far with their freedom.

After Sunshine Passes By:
This is the story about how Sybil puts Crescent into the satellite.  Here is another good background story.  I was interested to know how Crescent ended up where she did. Crescent really had no idea that she was going to end up in the satellite.  She had thought she had done all this hard work for the Queen and then ended up in some sort of bubble for the rest of her life. She really thought she was going to Earth.

The Princess and the Guard:
This story focuses on the reasons why Winter never used her Lunar gift. Unfortunately, Winter uses her gift to try to save a servant from killing herself only to find out that the servant was bring severely abused and Winter only prolonged it. It just goes to show that we really don't know what's going on behind closed doors. We also find out about Winter's scars on her face.  Such a great background story.

The Mechanic:
This story goes way more into detail about the day that Kai meets Cinder.  This was another story that I don't think really needed to happen.  We could really just figure this all out in our minds.  Though I suppose it's still sweet to read the details about that day.  Iko has always been an annoying character to me in this book series.  I know she is supposed to be the comedy but she just comes off as annoying.  She makes a fool of herself in front of Kai as usual in this story.

Something Old, Something New:
Wolf and Scarlet are getting married.  I'm not totally surprised by this.  There were a lot of characters in this book who are probably going to get married. This was a story with a big bow on it.  We get to visit all the characters again after all that happened in the series. This was a good story and should've been included at the end of Winter. It was like visiting old friends and I'm glad this story was written.

After reading all the background stories I wonder if Meyer always planned on writing these backstories.  They must've popped in her head as she was writing the book and then she jotted them down for a later date.  I don't think I've ever read a book full of background stories about all the characters in a series.  Since the author basically wrote this boo for her fans I will give this a higher score.  Only because it is very obvious that this is a book for people who need their favorite characters stories wrapped up. I would've been find without this book.