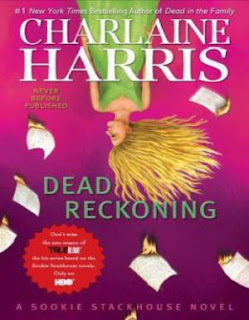 Dead Reckoning by Charlaine Harris
Just finished this book and liked it a lot!  Here is the goodreads description:    "With her knack for being in trouble's way, Sookie witnesses the firebombing of Merlotte's, the bar where she works. Since Sam Merlotte is now known to be two-natured, suspicion falls immediately on the anti-shifters in the area. But Sookie suspects otherwise and she and Sam work together to uncover the culprit - and the twisted motive for the attack. But her attention is divided. Though she can't 'read' vampires, Sookie knows her lover Eric Northman and his 'child' Pam well - and she realises that they are plotting to kill the vampire who is now their master. Gradually, she is drawn into the plot -which is much more complicated than she knows. Caught up in the politics of the vampire world, Sookie will learn that she is as much of a pawn as any ordinary human - and that there is a new Queen on the board . . . "

Wow.. I can't believe that after this book there is only two more books in the Sookie Stackhouse series.  It feels like yesterday I just started reading this series.  I have actually been reading these books for so long that my first three books in the series are in paperback because at the time they weren't released in hardback!  Then in May I was lucky enough to even get this book signed by Charlaine Harris (go to this link if you missed the post book signing) . It was quite fun!

This book was good but I could tell Harris was wrapping up the series.  A lot of closure in this book and a lot of story telling and not much action.  So I was a little disappointed in that.  There were also a few characters that we have grown to love that just don't even make an appearance in this book. But there are some that we love that make an appearance like Bubba! (love him) I am really ready for the fairy drama to wrap up.  But I suppose that will be the big bang in the last book.


SPOILER**
So I am dying to know who does Sookie end up with? Eric?  Sam?  Bill?  Personally I think she might end up with Sam after all... any thoughts on this?  If so please mark spoilers for those who might not have read this book yet!
END SPOILER**

Let's just say that I love love the Sookie universe and can't wait for the book in the fall the Sookie Companion.  There are  even going to be recipes in that book!