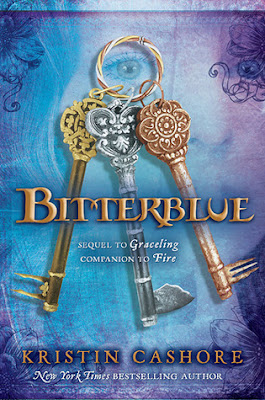 I have been waiting sooooo long for this book!!!  I finally got my hands on it.  Here is the goodreads description:


Eight years after Graceling, Bitterblue is now queen of Monsea. But the influence of her father, a violent psychopath with mind-altering abilities, lives on. Her advisors, who have run things since Leck died, believe in a forward-thinking plan: Pardon all who committed terrible acts under Leck’s reign, and forget anything bad ever happened. But when Bitterblue begins sneaking outside the castle—disguised and alone—to walk the streets of her own city, she starts realizing that the kingdom has been under the thirty-five-year spell of a madman, and the only way to move forward is to revisit the past. Two thieves, who only steal what has already been stolen, change her life forever. They hold a key to the truth of Leck’s reign. And one of them, with an extreme skill called a Grace that he hasn’t yet identified, holds a key to her heart.
I love revisiting the world that Cashore has created. And I really loved the little illustrations in this book. The maps... and the section pictures. This story is extremely long though. I was very surprised how long it was. There was way too much going on. Sometimes I was confused.

I know that this book is supposed to be able to be read as a stand alone but I would not recommend that.  You should for sure read the other books first.  I just feel like the reader will lose some of who's who if they skip the other two.  Also... it had been soooo long since I read Graceling and Fire that I had forgotten a lot about what happened in those books and had to wikipedia them.

This book goes in depth about figuring out Leck and what he did to his people.  But I hated how much Bitterblue was pushing everyone.  She would not let up!!  Eventually we are introduced to one of my most favorite characters Death and his cat.  I really loved him.  The covers for this series are beautiful!!  I am having trouble getting the pics next to each other.  I have been trying to find a program out there that can put several pictures into one JPEG.  Can anyone help me??

I gave the book 3 cats... would've been more but it was so long and drawn out and there was mystery after mystery.  It just got nuts!!!