Project Disney: The plan is to tackle all of the Disney films, re-reading the classic stories and tales that inspired many of them and to look at how the changes the filmmakers made, the new elements they introduced and the essential elements they kept. We will, of course, be talking about the films as movies as well, saying why we enjoy them and what some of our favorite moments are, but our focus will be on looking at them as adaptations. For the films that are not drawn from any one work we’ll be looking at some of the possible literary influences that we see in the stories. Inspired by Project Disney by Picture Me Reading. 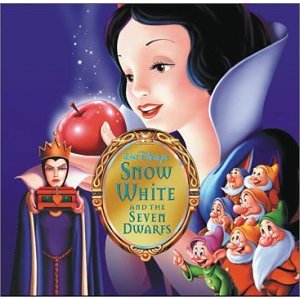 This week's movie and book is Snow White and the Seven Dwarfs .  Turns out the story Little Snow White by the Bother's Grimm which the movie is based off of is available free on the internet, and you can find it here!  I am very lucky to have a husband who loves Disney as much as I do!!  My bedroom is full of Disney snowglobes and other goodies.  I will show pictures of those later as we get to the movies that correlate with them.   I have also been to both Disneyland and Disneyworld.  Super super super super super fun! I mean... I have an entire board on Pinterest dedicated just to DISNEY! 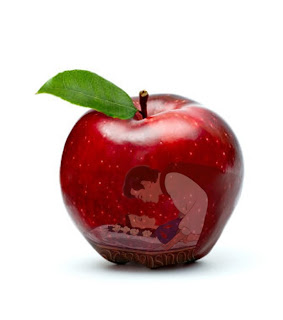 Well about Snow White... she is my least favorite princess and Disney movie. The evil queen is super cool.... of course I love the villains in all the movies.  I have all the Disney VHS movies... well they are all at my mom's house. I recently took this movie (on DVD) over to my cousin's house, who is 4, and she was like what in the world is this?  She asked me how old Snow White is, and I said I don't know, and she then told me that Snow White totally sounds like a little girl.  And she's right!  Snow White has the squeakiest voice!

I do love the story though in the movie.  Now-a-days you don't get Disney movies like this.  Murder!!!  Kill Snow White and get her heart!  I just love it! I love how the villains in the older Disney movies are true villains and evil.  Confession:  one thing I love about Disney is the villains! Plus how cool is the evil queen when she has a Magic Mirror???  (Which I loved when the mirror was featured in the Shrek movie!). 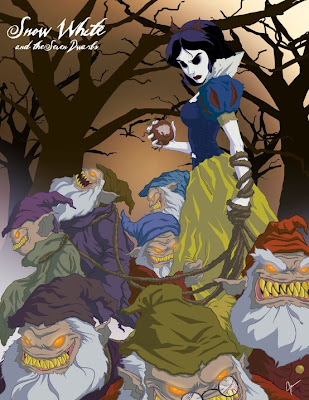 Now... about the dwarfs..  yeesh they are annoying.  I love their music in the film... but they are just too goofy for me.   Of course the need to be the humor in the movie.  In the book they really have no character at all... just apart of the story.  Snow White... she is actually quite young in the original story.  A child age seven!  Obviously Disney would need her to be much older for the story to work, so I am happy with this change.  I do actually feel bad for her... here is a girl who has done nothing wrong but exist and then is chased down because of it.

In the story Snow White's mother dies during childbirth and her father takes on a new wife.  This new wife is very jealous of Snow White who is described as having skin white as snow, lips red as blood and her hair ebony.  The new queen (Snow White's step mother) tries to kill Snow White in many different ways. When the story begins we are introduced to the magic mirror right away.  The magic mirror declares that the queen is the fairest in the land until Snow White matures and then the mirror says that she is the fairest in the land.

The queen sends a huntsman to kill Snow White who cries and swears she will run away. He then kills a pig and takes that heart to the queen telling her it is Snow White's. Snow White finds the Dwarves home .. which is really clean not dirty.  Plus the Dwarves do not have names in the story. The Dwarves come home from working and discover Snow White. They tell her she can stay there if she cleans and cooks.  The queen eventually goes and asks the mirror again who is the fairest and it reveals that Snow White is and even her location.  The queen sets out to kill her.

The dwarves know the queen will eventually find their house so they tell Snow White to not answer the door. She of course does answer the door. So a peddler comes to the door and sells Snow White some silk.  The peddler wraps her so hard that she suffocates almost and the dwarves come home and cut her out. Another peddler comes by (Snow White has not learned her lesson) this time selling combs. The peddler combs Snow Whites hair.. the comb has some sort of poison and the dwarves come home and revive Snow White. Finally Snow White sees the peddler again who this time has an apple to sell.  One side of the apple is poisoned and the other side is not. The queen bites the side that isn't poisoned to show Snow White it's OK and of course Snow White poisons herself. The dwarves can't help her this time so they get a coffin that can sit on the mountain side since they think she is too beautiful to go in the ground.

Next.. a prince comes by and sees Snow White in the coffin.  He asks the dwarves if he could buy it so he can see Snow White everyday. The dwarves agree to this.  So odd that he wants to just stare at a glass coffin and just look at her. As they are carrying the coffin a piece of the apple falls from her mouth and she wakes up. The prince tells her they are on the way to their castle and that she is to marry him and they will live happily ever after.  To punish the queen, they make her dance until her feet bleed and she dies. Which is why I like the creepy Brother's Grimm books.  I just like endings like this!

Also... for you Disney fans out there... if you have not checked out Annie Leibovitz photos for the Disney campaign you must do!! I wish I could make the images larger... but the way my blog is set up they go off the sides! :( 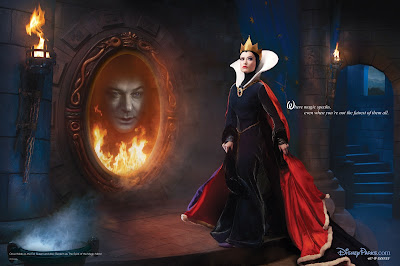 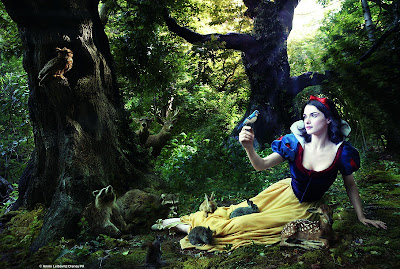 Though this is my least favorite movie... everyone who is a Disney fan should watch it and own it.

Find Picture Me Reading's post on Snow White here .
They are the host of this little Disney adventure so that post is not to be missed!!
Also Nerdy Book Reviews has a post.
Racheal Turns Pages does a great job comparing book to movie!


Here is my
Project Disney: Cinderella
Peter Pan
Treasure Planet
Sleeping Beauty
The Great Mouse Detective
The Hunchback of Notre Dame
The Princess and the Frog
Pinocchio
Fantasia
Beauty and the Beast
Lady and the Tramp
Alice in Wonderland
The Rescuers
The Rescuers Down Under
Tangled
Oliver and Company
Mulan
The Little Mermaid
Bambi
101 Dalmatians
Frozen
Fantasia 2000
The Jungle Book
The Emperor's New Groove
The Sword in the Stone
Aladdin
Atlantis
The Aristocats
The Lion King
The Many Adventures of Winnie the Pooh
Winnie the Pooh (2011)
Robin Hood
Hercules
Pocahontas
Dumbo
The Black Cauldron
Mary Poppins
Lilo and Stitch
The Adventures of Ichabod and Mr. Toad
Make Mine Music
Tarzan
Fox and the Hound
Melody Time
Posted by Angela's Anxious Life at Sunday, February 10, 2013