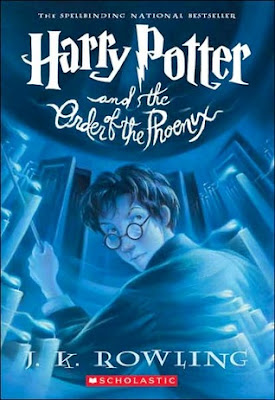 Harry Potter and the Order of the Phoenix by JK Rowling

Continuing with my re-read of Harry Potter, I finally finished Order of the Phoenix.  This is a massive book.  I forgot how long it is.  Here is the goodreads description:

Harry Potter is due to start his fifth year at Hogwarts School of Witchcraft and Wizardry. His best friends Ron and Hermione have been very secretive all summer and he is desperate to get back to school and find out what has been going on. However, what Harry discovers is far more devastating than he could ever have expected... Suspense, secrets and thrilling action from the pen of J.K. Rowling ensure an electrifying adventure that is impossible to put down

A lot of things happen in this book. I mean A LOT! So much information is contained in these pages... and yet this is my least favorite book.  I suppose it's because the story is now getting dark.  So much for fun times.  It has been a long time since I have read this book so I found some of the things missing from the movies cool.  Like Gwap's story.  In the book he seems WAY more dangerous then in the movie.  I find in the book you actually feel bad for Lockhart because this is where you see that his life was destroyed and the movies mad it seem like he was this bad guy when in reality I find that he was just a lost soul.   You find out in the book that Kreature really is kind of an evil houseelf.  Though only because of the family he grew up with.  Oh and one thing I just love about this book is the look we get into the Department of Mysteries.  I remember reading this book and not being sure is Sirius dies... but in the movie they make it clear because Bellatrix yells Avada Kedarva!

One of the things I disliked about this book was Harry's constant whining.  OMG!  He whines about people talking about his, his friends who are so scared that he is going to scream at them, he whines about everything it seems.  That is my biggest complaint about this book.

I remember when I first read this book.  A drastic change was happening in my life.  I was on a ferry from Alaska back to the "lower 48" (that is what people from Alaska say) to move to Utah.  Funny that I remember where I was when first reading this book!!  I never do that!

On to the next book in the series!!!