Tarzan of the Apes by Edgar Rice Burroughs 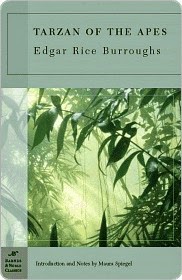 In 1888 Lord and Lady Clayton sail from England to fill a military post in British West Africa and perish at the edge of a primeval forest. When their infant son is adopted by fanged “great anthropoid apes,” he becomes one of the most legendary figures in all of literature—Tarzan of the Apes. Within the society of speechless primates, Tarzan wields his natural influence and becomes king. Self-educated by virtue of his parents’ library, Tarzan discovers true civilization when he rescues aristocratic Jane Porter from the perils of his jungle. Their famous romance, which pits Tarzan’s lifetime of savagery against Jane’s genteel nature, has captivated audiences for nearly a century.

I recently read Tarzan of the Apes for my Project Disney that was based off the animation Tarzan. I did really enjoy this book.. until about the last part and then I kind of skimmed it.  I love reading classics and this one was good.  The story is basically about a couple who gets left on an island by some pirates.  While there they have a baby, but the parents die.  So there is a female ape who just lost her baby and so when the apes discover the hut of the humans she finds Tarzan and adopts him.  It is a beautiful love story between her and Tarzan and just goes to show that love is love.

Tarzan is raised by these apes and learns the ways of the forest.  The first half of the book is him in the jungle killing lions and fighting with the head apes.  These apes are not a real breed they are much smarter then real apes. Tarzan learns how to hunt and comes across some natives whom he plays tricks on.  Which I thought was great to read about because it showed that Tarzan has human nature despite being raised by the apes.  During this time Tarzan does find the hut of the people who died (his parents though he does not know this).  He teaches himself to read from the books and papers he finds in the hut.

The second half of the book is more about when the other white humans land on the island and are trying to find a rumored treasure.  This party of people include the famous Jane Porter.  She is swept away by Tarzan even though he can't speak to her (he can only write at this time.. cannot speak English). Tarzan actually saves the group of people several times. The third part of the book is Tarzan becoming more civilized and going to America to find Jane.  Whom by the way (spoiler).. does not en up with Tarzan and that really irks me.   I enjoy the first two parts of the book.. the last part not so much. When Tarzan becomes civilized it just happens so fast.

There is also a lot of issues in this book that is very dated.  There is racism and bigotry that is just not acceptable today. Turns out there are a few books in Tarzan's series.  I am not really interested in continuing in the series though I am curious what does happen to Tarzan in the US since the book really just ends with the rejection from Jane. Yes.. the book ends in Wisconsin at a train station.  Not the ending I was expecting.

I enjoyed this book and would recommend it as a classic to read.


Clouds are covering! A read that lets me down every now and then but peaks out of the clouds!
Posted by Angela's Anxious Life at Wednesday, October 01, 2014