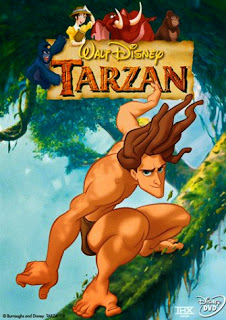 This week's Project Disney is Tarzan based off the book Tarzan of the Apes by Edgar Rice Burroughs. Tarzan was actually the first movie date my husband (at the time boyfriend) had many moons ago. How sweet!  Also.. Phil Collins does the music.. man he does some good Disney songs.  he should do the music for all the movies.  I haven't seen Tarzan in a long long time so I am so glad I took the time to watch.

The film starts out with Tarzan's parents and Tarzan are on a ship that is in a terrible storm where they get marooned on an island. They build a hut in a tree and settle in.  Of course disaster strikes and Tarzan's parents are killed. At the same time the apes in the forest (Kala and Kerchak) are morning the loss of their new born which has been killed by a tiger (Sabor).  Kala hears the cries of a baby the hut and heads that way.  She finds the baby Tarzan and adopts him.  Kerchak of course is very unhappy and tells her no though she defies him and keeps the baby.  In the book the beginning of the story is much different.  John Clayton, a.k.a. Lord Greystoke and his wife Alice who is pregnant go to the Congo to investigate the illegal recruitment of natives.  On their way the crew of the ship has a mutiny and maroons them on and island in Africa.

While on the island Clayton makes them a house of sorts to protect them from the wild animals that are in the jungle. One night an ape (the apes in the book do not talk it's gorilla sounds but of course Disney had to make them speak for film purposes) attacks husband and wife which makes Alice lose her mind.  She does give birth a few months later but unfortunately is never actually back to her normal self.  Now... as for the apes they are a much different story.  They are much more wild then in the film.  Kerchak and all the apes sometimes go on these rampages if they are angry.  They hit everyone in site.  Kala and her baby were in his way when he was going on a rampage.   She tries to jump out of the way but drops her baby and it dies.

Kerchak then goes to the cabin he had seen and breaks in.  Clayton is of course not ready for the attack because he is mourning his wife.  Clayton is killed.  When Kerchek goes to kill the baby in the crib Kala grabs him and trades her dead baby for him.  Kala names the baby Tarzan meaning "pale one".

Next up Disney shows some fun adventures Tarzan gets into. He plays with the other apes and elephants. The jungle is much more dangerous in the book.  Tarzan has no weapons at first and has to use his hands for everything.  Eventually he does find a knife in his father's cabin and learns how to use it which helps him handle the wild animals of the jungle better.  In the movie Tarzan has a spear out of no where and uses it.   During the scene in the film where he kills Sabor he does do his trade mark yelling which he does several times in the book.  The sounds is so terrifying in the book it scares people and animals alike. 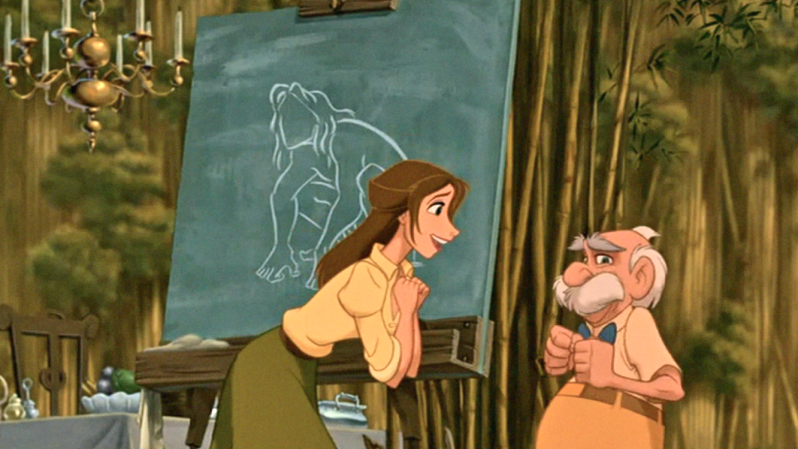 Gun shots are now heard in the film.  Tarzan goes to explore it and we find people!  Clayton and the Porters are now introduced.  Jane Porter is the lead lady.  I really love her in the film.  I think she is cute.  Jane is chased by a bunch of monkeys and Tarzan helps her get away from them.  There is a little scene where Jane starts teaching Tarzan her language.. it's kind of funny to hear Tarzan mimicking her English.  The apes meanwhile are looking for Tarzan and discover the human's camp.  Tarzan stay at the camp and learns to speak with Jane and the other humans. Jane tells Tarzan to take them to the apes whom the humans want to study.  Tarzan eventually does.  In the book no one is there to study gorillas. Tarzan actually meets humans because some local natives move into the area Tarzan and his ape family live.  An arrow actually kills Tarzan's mother and so Tarzan tracks down who sent the arrow. Tarzan enters their village and the natives think Tarzan is some evil spirit. Tarzan actually learns about the human race from his father's cabin where he spends a lot of time teaching himself how to read.

The Porters actually end up on the island because they are going on a treasure hunt.  Another mutiny happens so they end up on the same island as Tarzan. This part of the book was great to me.  Tarzan discovers one day that the cabin has been gone through and writes a sign on the door telling them not to touch his stuff. The Porters though never realize that Tarzan is the same man as the one they keep seeing because of Tarzan not speaking they think they are different people.

Tarzan in the film now wants to discover who is he really?  A man or ape?  In the film Kala takes Tarzan back to his father's cabin where he ponders life and then leaves the cabin in his fathers clothes. Tarzan at this point knows he wants to go with Jane to England.  In the book Tarzan rescues a sailor and nurses him back to life.  It is during this time that Tarzan discovers who he really is. The sailor arranges for Tarzan’s finger print to be matched with the baby’s print on Lord Greystoke’s diary, officially proving his lineage.  Tarzan now knows that he is not an ape though the Porters have by now already left for England.

In the movie little does Tarzan know that Clayton was scouting out the gorilla nest and was on their way to capture the gorillas.  Jane and her father have been captured also. A fight of course breaks out. Then Tarzan and Jane get to know each other.  She is going to head to England but changes her mind and stays in the jungle with her father and Tarzan. The book is far different and kind of upset me.  Jane and Tarzan get to know each other here and there.  It is a little bit of a case of instant love.  But still beautiful.  Tarzan is out rescuing that sailor I mentioned above but the other sailors presume everyone is dead.  Jane can't get them to wait any longer for Tarzan because everyone wants to head back.  Jane leaves Tarzan a note asking him to meet her in Baltimore (she is American not English).  So Tarzan makes his way there only to find out Jane doesn't like him as much outside the jungle. She accepts Clayton's proposal (he is a nice guy in the book) and so Tarzan is just left there!  That is the end of the book!

Really I like this movie and really enjoyed the book as well.  Be sure to check out my other Project Disney:

Snow White
Cinderella
Peter Pan
Treasure Planet
Sleeping Beauty
The Great Mouse Detective
The Hunchback of Notre Dame
The Princess and the Frog
Pinocchio
Fantasia
Beauty and the Beast
Lady and the Tramp
Alice in Wonderland
The Rescuers
The Rescuers Down Under
Tangled
Oliver and Company
Mulan
The Little Mermaid
Bambi
101 Dalmatians
Frozen
Fantasia 2000
The Jungle Book
The Emperor's New Groove
The Sword in the Stone
Aladdin
Atlantis
The Aristocats
The Lion King
The Many Adventures of Winnie the Pooh (1977)
Winnie the Pooh (2011)
Robin Hood
Hercules
Pocahontas
Dumbo
The Black Cauldron
Mary Poppins
Lilo and Stitch
The Adventures of Ichabod and Mr. Toad
Make Mine Music
Fox and the Hound
Melody Time
Posted by Angela's Anxious Life at Tuesday, September 30, 2014