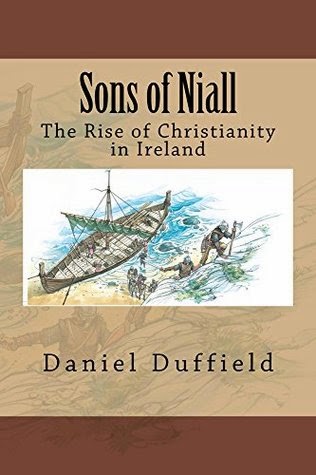 Patricus was captured as a young boy by High King Niall of Eriu land in one of his pirate raids of Roman Britain. The young boy became slave to a druid master and then was freed after seven years returning to Britain to finish studying to become a priest in the church. Then one night, Patricus had a dream where he felt called by God to return to Eriu land and spread his Christian faith and religion among the pagans. When he arrives on Eriu land, he comes face to face with the ruling sons of Niall, druids, and witches that he battles in his attempts to evangelize the emerald isle. An unlikely hero named Dovfield arises to assist the priest in his efforts at facing the ruling pagans of the old, Eriu ways. But, Dovsfield has secrets that he himself doesn’t yet know. Secrets that unfold as the forest spirits guide him to his destiny to stand and fight against the tyrants that rule the land; a battle that unleashes the rise of Christianity in Eriu.

The first book in this series called Niall and the Irish Pirates was the first self published book I had read. I was really looking forward to the second book so I was very excited when I received the book from the author.  I thought the story was quite engaging.  The books transitions well back into the story where the first book left off.  There is a fun map at the beginning of the book that helped me keep a picture in my mind of where events where taking place.

This books introduces much more history into the religions of the time, including the introduction of Christianity. We get to follow a few characters along who discover more about themselves.  The main character is Dovsfield who is the son of Niall (though he doesn't know it).  I enjoyed reading about Dovsfield and his bravery.  He is a great man who has integrity and honor.  In the book we even get to follow some adventures of a sword.  Yes .. there is a sword that bounces from one owner to another, the original owner being Niall.  Seeing where the sword would pop up next was entertaining.   I liked that there is also a strong woman warrior in the story, she is Native American.  I was surprised to see a Native American enter the story but it does work.  It was really interesting to read about different religions mixing and the hardships people would endure to fight for their religion of choice.  Of course.. the book has a little fantasy elements as well.  Witches and druids included.  I think having the fantasy in the novel brings so much more enjoyment into my reading experience.

I could tell there were many improvements in this book over the first book... plus this didn't feel like the typical middle of the road book you find in a series. I can't stand the ones that I feel like nothing was moved on in the story line and this one for sure moves things along!  I didn't expect there to be another book in the series but the end of Son of Niall is left up in the air so I know a third book is coming.  I look forward to reading the installment.  I really do recommend this book to those looking for a quick read especially if you like supporting independent authors.   The author even signed it and made it out to me which was a great treat!!!

Sun is shinning!!!  Great day to go outside and read this book.
Posted by Angela's Anxious Life at Tuesday, September 02, 2014