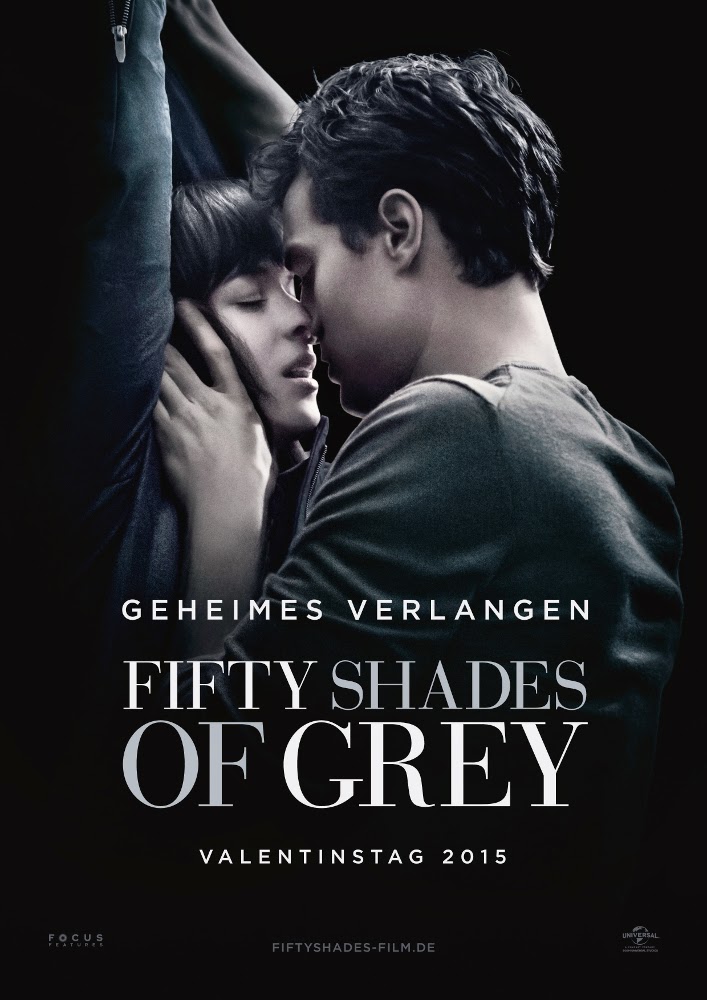 When college senior Anastasia Steele (Dakota Johnson) steps in for her sick roommate to interview prominent businessman Christian Grey (Jamie Dornan) for their campus paper, little does she realize the path her life will take. Christian, as enigmatic as he is rich and powerful, finds himself strangely drawn to Ana, and she to him. Though sexually inexperienced, Ana plunges headlong into an affair -- and learns that Christian's true sexual proclivities push the boundaries of pain and pleasure.

Well.. I did it.  I had to go and see this movie and I was lucky to find a girlfriend who wanted to go with me. If you remember from my review of the book Fifty Shades of Grey I didn't really love it. It was just so over the top for me but I also don't really enjoy romance novels so I figured that was one of the big reasons why I didn't love it.  Still I was quite curious about the film.

It is odd that it seems to be shunned upon by a lot of people. People = EVERYONE. People who have read the book/not read the book, seen the movie/not seen the movie. It's kind of funny.  I mean... for once a woman is shown enjoying herself in some sexual situations and it would seem like that is not OK.  But... I do have to agree that the parts of the movie where she (Anna) is being controlled by Christian is nuts.  I just couldn't do it in my life.   The movie itself was OK though I wouldn't watch it again.  If you read the books you already know what to expect, my friend who went with me had not read the book.  She too thought the movie was just OK. Honestly it gets kind of boring.  Really the whole movie is about Christian trying to get Anna to sign this contract about a dominant-submissive relationship.  He apparently gets off on controlling someone.  When she asks him why he keeps saying "it's just who I am".  I think he probably needs a therapist.

The sex scenes aren't that big of a deal to me and I was quite pleased that they didn't have an actress playing Anna who had huge boobs.  Thank you to having a woman with a more realistic body.  Though she is thin and people will complain that it is not a typical body.  Maybe I was happy because her body type is similar to mine. Of course no male nudity.. surprise!  Apparently the actor Dornan's contract says no penis allowed.  Boo.  I saw a couple leave during the first sex scene and never come back!

I think the actress Dakota Johnson does make the film. She is like all the other women out there.  Looking for love, trying to make it in the world, living in a little apartment and eating cheap food.  She's the actress who has to brave on the screen in her own skin and really has to do all the heavy breathing and what not in the scenes.  Sometimes the film reminded me of Pretty Woman which is sad because then I kind of felt like it was a hooker/client relationship.


I really do enjoy the soundtrack to this movie too!! So a few good things come from this film. This song right here by the Weekend is amazing!


And this song by Annie Lenox