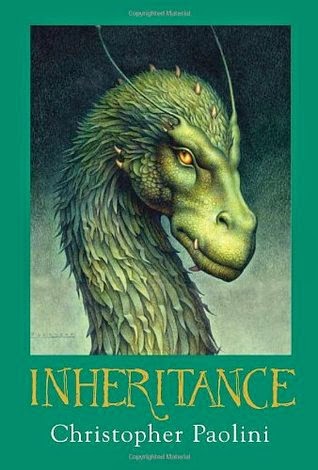 It began with Eragon... It ends with Inheritance. Not so very long ago, Eragon — Shadeslayer, Dragon Rider — was nothing more than a poor farm boy, and his dragon, Saphira, only a blue stone in the forest. Now the fate of an entire civilization rests on their shoulders. Long months of training and battle have brought victories and hope, but they have also brought heartbreaking loss. And still, the real battle lies ahead: they must confront Galbatorix. When they do, they will have to be strong enough to defeat him. And if they cannot, no one can. There will be no second chance. The Rider and his dragon have come further than anyone dared to hope. But can they topple the evil king and restore justice to Alagaësia? And if so, at what cost? This is the spellbinding conclusion to Christopher Paolini's worldwide bestselling Inheritance cycle.

I did it! I finished this series. I read all four books in a row and it has taken me a long time to finish them. I am so glad I did. This book was almost just as good as Eragon if not better. I loved the forth book so much more then the second and third books and am so glad I held on to finish this epic fantasy.  Like this reviews of the other books in the series I will repeat this book is WORDY.  I mean WORDY.  I don't mind that though in a fantasy because I am looking for world building.  I like to put myself in the middle of a huge fantasy world.  Most of the reviews on goodreads that has less then 3 stars is because they are complaining about the descriptions... so don't read it if you don't like that.

This book was much more fast paced then the other books in the series.  I loved it.  We get to visit with all the characters we've grown to love throughout the series.  The final showdown between the mad king Galbatorix and the rest of the Alagaesia.  I had a little issue with this part of the book.  Now this part here is a spoiler so if you don't want to know how Galbatorix dies then skip to the next paragraph.  Eragon makes a spell to allow Galbatorix to know how everyone feels from what his evil deeds has been doing.  Galbatorix can't take it so he just explodes.  I wasn't even sure if I was reading it right.. I thought maybe he disappeared and was going to appear again later.   I guess that was his death scene.  I did hope there was going to be a huge dragon battle at the end.... that doesn't happen.  I mean.. Eragon finds all those dragon eggs.  I wanted them to hatch at least.

Though... after the showdown there was another 100 pages of wrapping everything up.   I think this was almost more for the author then it was for the readers I felt like.  I still enjoyed it.  It was a long winded ending but really wrapped up most of what we would've been wondering about had Paolini not done it that way.  The ending of course is not the way I would've wanted it.  But it didn't make me mad either.  There is still a future left up in the air for us to wonder what will happen years after the book ends.  This book was published in 2011 and there still is nothing new in the book world from Paolini.  I am surprised about this.  You go to the official website for the author and he says he is working on some things.

I was reading through some reviews on goodreads and someone introduced me to this guy on youtube who reads the story... and it's great and hilarious.  Check it out for a laugh...


I liked this series and am glad I did read the whole series. Yeah for reading books I own which is one of my big goals for this year!

Sun is shinning!!!  Great day to go outside and read this book.
Posted by Angela's Anxious Life at Sunday, February 15, 2015