This issue I talk about DC Universe VS Masters of the Universe, League of Extraordinary Gentlemen Vol 3 Black Dossier, Wonder Woman Vol. 5 and Superman/Wonder Woman vol. 1. 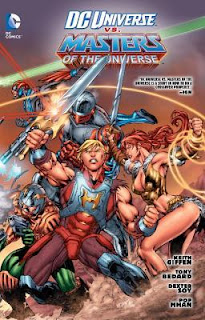 First up DC Universe VS Masters of the Universe.  I really enjoyed this comic.  I love love all thing He-Man.  So when I saw this was out I couldn't wait to read it.  It has a villain (I won't spoil it for you but it's a He-Man character you wouldn't expect) who is working with Skeletor on Earth to capture it.  So He-Man heads to Earth to find Skeletor and of course runs into the Justice League.  The Justice League becomes controlled by Skeletor's magic so there is a big battle.  A lot of DC characters are in this comic, villains and heroes. Constantine is in this comic a lot and it really perked my interest in reading his comics. No She-Ra in this issue but I am guessing she will come back in He-Man vol. 3. 5 out of 5 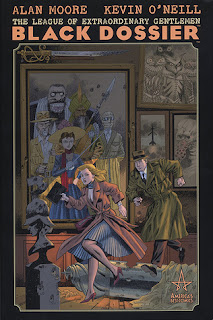 Next up The League of Extraordinary Gentlemen Vol. 3 Black Dossier. Why did I continue in this comic series?? WHY??  If you've kept up on my comic reviews you know I really loved vol. 1, vol 2 feel off but at least it still had the cool characters that Alan Moore had been using (literary characters/historical characters mixed up in the comic).  This one was just BLAH. We follow two of the characters from the first comics who apparently won't die and are getting younger???  The go to the old base and steal their Dossier.  Half the comic are like books that we have to read.  Entire sections that aren't the comic genre but long stories about who knows what.  They didn't seem relative to the story though I know probably if I had taken the time to read them I would've had more background.  The story was just them running around with this Dossier with really no purpose on where they were going.  Then at the very end of the comic they end up with this really WEIRD character and end up in a world I couldn't understand.  Then I started to think about it and the pictures and the coloring used made it look like it was supposed to be 3D. So I googled it and sure enough the whole end of the book was in 3D but I didn't have 3D glasses since I checked the book out from the library.  Disappointing. 1 out of 5. 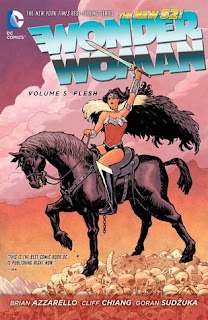 I am enjoying the Wonder Woman comics soooo much!!  She is my favorite all time super hero and has been since I was a little girl. What I am enjoying the most is the mythological side of Wonder Woman is showing up in her comics.  The Justice League side of her is found in other comics... so this really is her own story.  There is still a battle for who is going to be lord of Olympus ... Apollo, the First Born??? Wonder Woman also takes her spot as God of War, or will she continue that???  I love the art in this series!!  I think eventually DC is going to cut in and add some other DC comic stories in.  For right now this series can be read as a stand alone without the readers having to have to read a bunch of other DC comics along with it. I read there is going to be a new writing team and a new artist so I am guessing that is going to happen after Vol. 6.  I hope they do as good of a job.  5 out of 5. 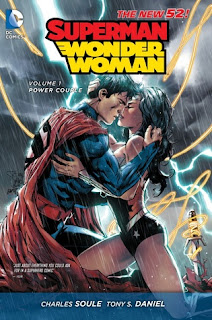 Superman/Wonder Woman was a comic I wasn't too sure about.  I have always been in the Batman/Wonder Woman camp... so that is a comic I would like to read.  Alas we have Superman and Wonder Woman.  I do enjoy it though because my husband's favorite superhero is Superman and mine is Wonder Woman so that does make it kind of cute.  The artwork in this comic is stunning.  I loved it.  The story was good too.  Basically we see these two try to balance love and saving the world. Wonder Woman doesn't mind if the world knows they are dating, and Superman of course wants to keep it all a secret. The Wonder Woman comics are mixed into this one with Apollo and Superman not getting along.  That is a neat fight to read about.  Honestly I am looking forward to see where this series goes.. started off great!  5 out of 5

This counts for 20 comics towards my 2015 Graphic Novels Challenge!!