Harry Potter and the Prisoner of Azkaban by JK Rowling-Review 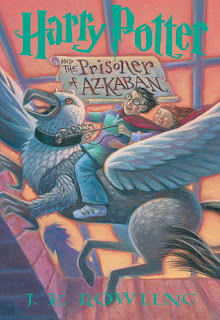 Harry Potter and the Pisoner of Azkaban by JK Rowling
On my way through my re-read of Harry Potter!!  Just finished book 3 and loved it.  Here is the goodreads description:

Harry Potter is lucky to reach the age of thirteen, since he has already survived the murderous attacks of the feared Dark Lord on more than one occasion. But his hopes for a quiet term concentrating on Quidditch are dashed when a maniacal mass-murderer escapes from Azkaban, pursued by the soul-sucking Dementors who guard the prison. It's assumed that Hogwarts is the safest place for Harry to be. But is it a coincidence that he can feel eyes watching him in the dark, and should he be taking Professor Trelawney's ghoulish predictions seriously?


Great book... I feel that the movie really covered this book well. This is one of the books where I wish I was reading it for the first time again and didn't know about Sirius or the Time Turner. I had forgotten how much Crookshanks was in this book.  That cat plays a huge part. I can't believe this book came out in 1998!!  I don't think there was much Potter craze yet.

One thing I like about this book is getting to know some of the Order.  Snape... whom Sirius tried to kill, reveals to us why he hates James Potter and his friends.  I can't believe they were going to send him straight to a werewolf.  And sad that nothing was really done to punish them in school for it.  So I would be mad to if I was Snape.

Here are my reviews of the other books in the series: