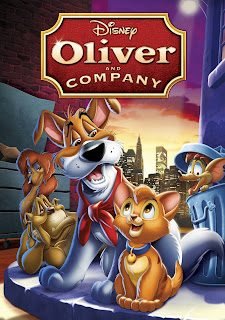 "Cool it guys, it's just a cat!" This week we are covering Oliver and Company based off the book Oliver Twist by Charles Dickens.  I loved Oliver and Company growing up.  The music is sooooo fun!!  My sister and I had a toy of Georgette (one of the dogs) and we would always fight over who's toy it was.  The vocals in this movie are amazing. Huey Lewis, Bette Midler, and the Pointer Sisters.  Great choice to have Billy Joel as the voice for Dodger.  I mean the song "Why should I worry, why should I care?"  Dodger even plays the piano like his voice actor Billy.  Classic!

Comparing the movie to the book it's based off it is a big difference to me. This movie obviously takes place in 1988 when it was made. Unlike other Disney movies that take place in a different time period. It's like a cartoon 80s movie.  There are characters are a little different.  Fagin and Sikes who are criminal pals in the book Oliver Twist are clearly not on the same level here.  Sikes is the main boss and Fagin owes him a debt.

Oliver is taken by a girl Jenny to her home in the movie.  This could be similar to the book where Oliver is taken by Fagin to join his criminal gang.  She wants to give him a good home.  Dodger doesn't know this and goes and rescues him from Jenny.  When Oliver gets back to where the gang lives Fagin decides to blackmail Jenny to get the money he owes Sikes (we never find out why Fagin owes Sikes money). Fagin has a change of heart and just gives her Oliver.  But Sikes captures Jenny and tries to blackmail her family.  Dodger and the gang rescue her.  The end of the movie has a huge car chase that is pretty fun to watch.

At the end of the movie Oliver does end up staying with Jenny.  This doesn't surprise me.. she is really sweet to Oliver.  The difference here and the book too is the book is more about class.  Oliver Twist comes from a rich name which allows him in the end to have a better life.  In the movie, Oliver the cat is poor from the start and then ends up living in a well to do family.

It had been a while since I'd seen this movie... what fun it was to watch again!!!  I love it, though really it doesn't really have too much in it from the book it's based off of I feel.  Be sure to check out my other Project Disney's!
Snow White
Cinderella
Peter Pan
Treasure Planet
Sleeping Beauty
The Great Mouse Detective
The Hunchback of Notre Dame
The Princess and the Frog
Pinocchio
Fantasia
Beauty and the Beast
Lady and the Tramp
Alice in Wonderland
The Rescuers
The Rescuers Down Under
Tangled
Mulan
The Little Mermaid
Bambi
101 Dalmatians
Frozen
Fantasia 2000
The Jungle Book
The Emperor's New Groove
The Sword in the Stone
Aladdin
Atlantis
The Aristocats
The Lion King
The Many Adventures of Winnie the Pooh
Winnie the Pooh (2011)
Robin Hood
Hercules
Pocahontas
Dumbo
The Black Cauldron
Mary Poppins
Lilo and Stitch
The Adventures of Ichabod and Mr. Toad
Make Mine Music
Tarzan
Fox and the Hound
Melody Time
Posted by Angela's Anxious Life at Saturday, September 28, 2013