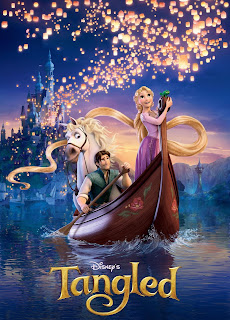 I am so excited that this week's Project Disney is Tangled based off of the book Rapunzel by The Brother's Grimm.  I love this movie sooo much.  I think it deserves more love then it gets. The story Tangled is based off of is really similar to the film. Of course there are a few changes... Rapunzel's parents have to give her away to the witch because her mom eats from the witches garden.   The witch raises Rapunzel in a tower, but then a prince travel's past and hears Rapunzel.  He calls to her and then plan that he takes silk up every time he visits so that Rapunzel can get down.  The witch discovers this and puts Rapunzel in a desert.  The prince goes back to find Rapunzel only to discover the witch.  He jumps out of the tower but goes blind because he lands on some thorns.  He wanders and ends up in the desert with Rapunzel.  They find their way out and then their lives are great.

This is actually a happy ending for a Grimm story.  The film of course adds so much to this.  In fact, Disney really tried to attract male viewers with Flynn Rider  (the love interest in the film).  Who is actually not a prince but a thief! The name of the movie was originally going to be called Rapunzel but then it was changed to Tangled.  The story has a really beautiful love story.  Not only between Flynn and Rapunzel, but the love of family.  An evil witch (Gothel) steals Rapunzel when she is a baby because her hair makes Gothel young again.  Rapunzel's parents send up lit lanterns in the nighttime every year on Rapunzel's birthday.  Honestly this is beautiful. 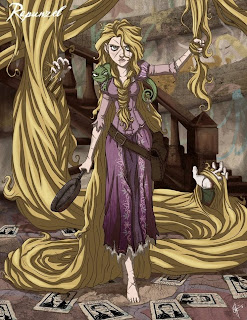 There are two really great side kicks in the movie.  One is a chameleon named Pascal. I love this little guy.  He is Rapunzel's only friend for quite some time so he tends to act like a parental figure.  Plus there is a hilarious horse, Maximus.  Oh man do I love this horse! I mean I laugh out loud so much what that horse is on screen.

I think the music in this film is great too.  The love song!!

I love it so much!! Back to the movie. So Flynn has to hide from the city guards for being a thief (he stole a crown.. which turns out to be Rapunzel's) and ends up in Rapunzel's tower.  Of course Flynn convinces her to be brave and go out into the world. She tells him if he will take her to see the lights (the lanterns her parents put in the sky) then she will give him the crown.  So now a big adventure starts of the two of them making it to the city.  Here they discover that Rapunzel is the missing daughter.  Of course she cuts off her hair at the end of the film and that totally BUGS me!! Her hair! 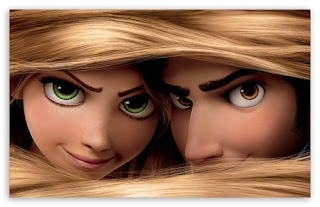 If you haven't seen this film and you love Disney then it is time you check it out.  Fun!  Here is the Annie Lebovitz picture of Tangled featuring Taylor Swift: 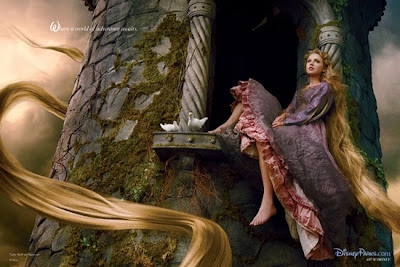 I saw this film in 3D and it was totally worth paying extra for.  Sometimes anymore 3D movies are made just to make money and the 3D looks crappy.  But this one was pretty decent.

PROJECT DISNEY:
Snow White
Cinderella
Peter Pan
Treasure Planet
Sleeping Beauty
The Great Mouse Detective
The Hunchback of Notre Dame
The Princess and the Frog
Pinocchio
Fantasia
Beauty and the Beast
Lady and the Tramp
Alice in Wonderland
The Rescuers
The Rescuers Down Under
Oliver and Company
Mulan
The Little Mermaid
Bambi
101 Dalmatians
Frozen
Fantasia 2000
The Jungle Book
The Emperor's New Groove
The Sword in the Stone
Aladdin
Atlantis
The Aristocats
The Lion King
The Many Adventures of Winnie the Pooh
Winnie the Pooh (2011)
Robin Hood
Hercules
Pocahontas
Dumbo
The Black Cauldron
Mary Poppins
Lilo and Stitch
The Adventures of Ichabod and Mr. Toad
Make Mine Music
Tarzan
Fox and the Hound
Melody Time
Posted by Angela's Anxious Life at Friday, September 06, 2013