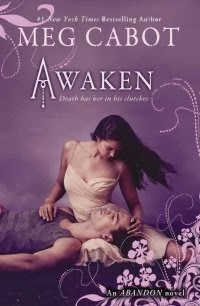 
I finished another series I started!  YEAH!  Unfortunatley.. this book was a snoozer (is that a word?). It took me a few days to read it because I just kept getting distracted and started doing other things.  Here is the goodreads description:

Death has her in his clutches. She doesn’t want him to let go. Seventeen-year-old Pierce Oliviera knew by accepting the love of John Hayden, she’d be forced to live forever in the one place she’s always dreaded most: the Underworld. The sacrifice seemed worth it, though, because it meant she could be with the boy she loves. But now her happiness — and safety — are threatened, all because the Furies have discovered that John has broken one of their strictest rules: He revived a human soul. If the balance between life and death isn’t fixed, both the Underworld and Pierce’s home back on earth will be wiped away. But there’s only one way to restore order. Someone has to die.

I originally read the series for my Young Adult Book Club when we read Abandon.  Let me start by saying... nothing happened in this book. It read more like a middle book then a series ender.  The entire first half of the book was everyone just trying to figure out what to do with the dead.  (By the way... this review will assume you have read the first two books).  Sooooo we are waiting for things to happen... the ships that are supposed to take the dead are coming straight for the docks at top speed.  So John (aka Hades) decides to go out there and make the ships crash into each other.

Spoilers sort of:  Then we spend many many chapters with some people upset that John dies in this crash, but we all know that he is Hades so of course he is not going to die.  That was so obvious to me.  Ughhh the romance in this book was a little corny.  Pierce can't tell John she loves him so she keeps doing it with her eyes.

I still don't understand why Pierce wouldn't just say it... or say she would marry him.  Then there is all this odd talk about demon babies.... WHAT?  I was hoping for more mythology in this book but that was not it.

The end of the book is on and on dialog about who knows what.  I mean battles with Furies is going on and everyone is still so chatty.  I guess maybe what I wanted in this book was more plot. New characters are added in this book (like main characters) and I just thought that made the story a little more messy. The last two chapter was so rushed... boom everything is wrapped up and we are done.  Though to be honest I was glad. Honestly.. this is why sometimes I have to force myself to read these Paranormal YA trilogy endings.  I am tired of starting series and not finishing... but I think I could've skipped finishing this one.

My reviews:
Abandon by Meg Cabot
Underworld By Meg Cabot