The Diviners by Libba Bray-Review 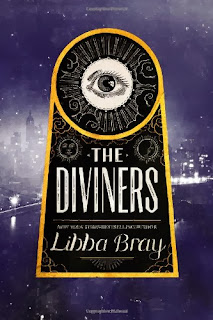 The Diviners by Libba Bray
This month's book club pick for my Young Adult Book Club is The Diviners by Libba Bray.  I loved this book.  I like that it's spooky and eerie.  Makes me wish there was more horror in young adult.  Yes I know .. this probably isn't really horror, but it's as close as you are going to get in YA.  Here is the goodreads description:

Evie O’Neill has been exiled from her boring old hometown and shipped off to the bustling streets of New York City—and she is pos-i-tute-ly ecstatic. It’s 1926, and New York is filled with speakeasies, Ziegfeld girls, and rakish pickpockets. The only catch is that she has to live with her uncle Will and his unhealthy obsession with the occult. Evie worries he’ll discover her darkest secret: a supernatural power that has only brought her trouble so far. But when the police find a murdered girl branded with a cryptic symbol and Will is called to the scene, Evie realizes her gift could help catch a serial killer. As Evie jumps headlong into a dance with a murderer, other stories unfold in the city that never sleeps. A young man named Memphis is caught between two worlds. A chorus girl named Theta is running from her past. A student named Jericho hides a shocking secret. And unknown to all, something dark and evil has awakened

I like Libba Bray. Yes I have only read Going Bovine but I really enjoyed that book. For a long time I didn't allow books from the same author to be nominated in my young adult book club well frankly because someone complained.  We read two Neil Gaiman and then someone was upset.  Well it's been a few years since that happened and I thought.. you know what?  There aren't like a ton of people participating and the person who complained didn't even participate in the monthly discussions so why was I even worried about what they thought?  So the group read Going Bovine years ago and I thought it would be ok to let the Diviners get nominated.  It won of course.. being that people love it.

I am so glad it got picked.. I really enjoyed it.  This is a long book... and I question that it is marketed as a young adult book.  Yes the characters are around 17... but it really read to me like an adult novel.  The only thing that probably kept it from going that far is that the murder scenes in the book happened "off screen".  So we knew what happened but didn't actually read the details about how it happened.  I read this book pretty fast for as long as it was. Today I read 5 1/2 hours to finish it up! I liked it. I have a friend who tried to read it and just couldn't get into it at all.  I mean how could I put down this spooky book??

I really like that the book ended and wrapped up the story. Yes there is still a main story that will carry onto book 2, but I am so glad that we don't have to wait for some long drawn out story. There is sort of a love triangle with Sam Jericho and Evie. But not a cheesy one to me. I do like Evie with Sam myself too. (There again this reads more like an adult book to me).

I think Jericho's secret was kind of cool. I think it added a little steampunk element to the story. I almost was thinking he was some type of Frankenstein's monster. I like Memphis' and Isaiah's stories. But I didn't think that it was ever really tied in to the main story going on yet. Really the only way it was tied was Memphis and Theta. But this multiple POV allows us to almost read two different stories at once. I like how this book is showing come controversial topics for the 1920s , interracial relationships and homosexuality. It even brings up rape and abortion which might get young adults talking about these subjects.

I wish that Evie would've found out eventually that she was the one who released Naughty John. She did it at her party with the Ouija board and I don't think she ever knew. I played with the Ouija board growing up sometimes. But when I was in college we got real serious with it. Now some of you may believe this and some of you may not.... but it got a little crazy there for a little while. We would play and the Ouija board would only move around when I played. So all my friends always made me play. One night some friends (I lived in the dorms) came up to my room to play and we told them that when I played the board would go nuts. They didn't believe me. So we told them to ask it a question that they knew I didn't know (they weren't actually playing on the board with us). So they asked it what their dorm room number was. And sure enough... it answered correctly. Then one night we were playing and it spelled out someone's name and right after that the phone rang and it was that person! Other crazy things happened as well. Anyways... I was starting to get a little scared from the whole thing, I came back to my dorm room from work and turned on the light and my rosary broke out of no where! I was sooo scared. I went straight to my friend's apartment and slept there and never played again. Have any of you had any Ouija board experiences?????

OK... back to the story. I wonder if in these dreamscapes where the Diviners keep meeting.. if they feel a pull to each other and this will be a factor in future books??  Speaking of book 2, Lair of Dreams, Bray had this to say about it:
Q: Can you give us any hints on what to expect from book two? I, for one, am dying to find out more about the Man in the Stovepipe Hat (who what is he?!) – can we expect answers?
Libba: You can expect more pages. Probably odd punctuation. And “Diviners 2” somewhere on the title page. I kid. I can tell you that there is a character, a Diviner, who makes a brief appearance in the first DIVINERS, and she takes a much more central role in the second book as does Henry. We learn a bit more about Project Buffalo and The Man in the Stovepipe Hat, or Mr. Fun Times, as I call him. Of course, this could all change and I could end up giving you an armadillo musical in the middle of the book. It could happen.

This makes me totally excited about the next book but it looks like it's pushed back to August 2014!  NOOOOO!!  I really don't love the new cover art on the book.  I really enjoy the original (the one you see at the top of this post).  I am surprised they changed the look of the covers already.  So now those who own the old book will have non-matching covers in their collection already! These covers have a sci-fi feel to me. Here are the new covers: 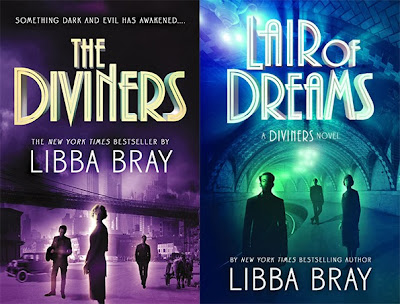 I love that this book takes place in the 1920s.  I love reading about that era.  I read the Flapper series and really enjoyed that too... so I have been on the hunt for novels in this era. I guess my only complaint would be that there was quite a few plot lines going at once.  This book is a little wordy.  I mean.. nothing really gets going until 80 pages in.. and then even at the end of the book when everything is done and wrapped up we have to read another 40 pages about what the characters are out doing (back in the speakeasies and what not).  It could've ended much sooner.  The 1920s slang is a little but over done in the book.  I liked reading it.. but maybe we needed some type of dictionary in the back of the book with the meanings of the words. Overall though... I really enjoyed it.


The crystal ball says:
Clouds are covering! A read that lets me down every now and then but peaks out of the clouds!