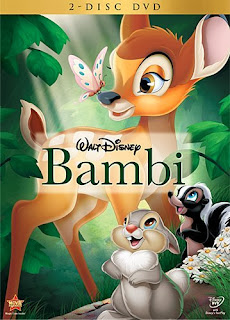 This week's Project Disney is Bambi.  I read the book Bambi A Life in the Woods by Felix Salten which the film is based off of.  Both are so sad and hard to read/watch.  Bambi was never one of my favorite Disney movies growing up because it was so sad.  We did have an orange tabby cat growing up though named Thumper! Funny that we named a cat after a movie we didn't love!  hahahah!I just watched the movie for the first time in many many years.  It wasn't as sad as I remember it being as a kid.  Maybe because now I am desensitized to violence, which is sad if you think about it.

When watching Bambi you just know this is old school Disney.  The illustrations are very 2D.  There is a part where Bambi and his mother look at a meadow and I was blown away.. it looked like I was just looking at a painting and not a movie.  After reading the book I am surprised Disney chose it to base a movie off of.  It is a hard to read book.... you basically read it from the point of view of all the animals in the forest and it is hard to read.  Boy is it tough to be a wild animal!! 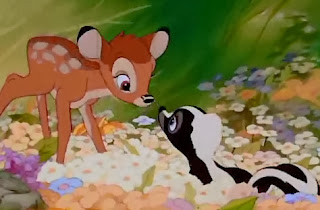 In the movie Bambi is born in the forest and all the animals come to see the little prince.  Here we are introduced to his fun friend, the Rabbit Thumper. In the book by Salten, Bambi's mother gives birth to him all alone in the forest. She alone raises him.  He runs around and discovers butterflies, hummingbirds, and meets Friend Hare who visits Bambi every now and then in the book.  The movie of course continues on in a happy way.... Bambi runs into a skunk that he accidentally calls a flower and the Skunk keeps that fun name for the rest of the film.  In the book.. Bambi sees hardship.  He is introduced to the meadow where his mother warns him of the dangers that can be found out there.  He then meets his other family members in the meadow including his Aunt Ena, and her kids Faline and Gobo.

Winter comes which is a hard time on the deer.  In the movie Bambi ice skates around with Thumper and it's pretty fun to watch! The book tends to be on the more realistic side.  Telling us about how the animals begin to hunt and how scarce food is. In the movie.. one of the saddest deaths ever happens! Bambi and his mother are out in the meadow when she hears and smells man.  She tells Bambi to run as fast as he can and not look back.  The death isn't actually shown on film, but the gun shots are heard.  In the book all the forest is awake and running from man.  He seems to but hunting everything in sight in the book.  This is a little unrealistic to me, though I know the book was trying to show how evil man is.  Another female deer ends up taking care of Bambi for the winter (in the movie it's Bambi's father.. which surprisingly is what Bambi II the movie is all about).  In case you didn't know: Bambi’s mother seems to have a few unofficial cameos – in the forest and as a mounted head on the wall in Sword in the Stone; the deer that Shere Kahn is after, and also in the opening of Beauty and the Beast.

Now Spring comes... and everyone is all grown up.  In the movie we find out all about spring love.  The animals are singing all about it (in another musical montage) and Bambi, Thumper, and Flower all fall in love. Bambi runs into Faline again.. and they love each other.  In the book they run into each and frolic but like in real life Bambi doesn't hang around long. It is just for mating season and then he is out of there! In the book.. Bambi learns all about deer calls.  He hears a call and thinks it's Faline and tries to go near it and find it.  The Great Prince (Bambi's dad) stops him and teaches him what a deer call actually is.  A trick by man to kill deer.

Next up... we see man at his worst. He is not only out to hunt.. (and shots Bambi) he also accidentally starts a forest fire. I am a third generation Forest Service worker so I appreciate what Disney was trying to do here.  This does not happen in the book.  In the book... an odd thing happens.  A deer is taken when he is just a doe and is raised by man.  Man then releases him back into the wild with a collar.  When man comes into the forest again that deer goes to say hello and it killed on the spot.  I have no idea what that was about??

So how does this all end???  Well the Disney movie has everyone having a great family after the forest has recovered from the fire.  In the book the Great Prince takes Bambi in after he has been shot by the hunter.  After weeks and weeks of recovering the Great Prince has one more lesson to teach Bambi.. that man is not as powerful as Bambi thinks.  They go and find a man who has been shot (assuming from another man???). The Great Prince then goes and finds a place to lay down and die and Bambi now takes over the forest.

Sooooo... Still not my favorite film.  It is just so sad.  I watched it a lot when I was a kid.. and still remembered a lot of the lines when I watched for this post.  But I don't really care to watch it again for a long time.  The book was good but also not really a positive book.  I think everyone should read it as a classic. Of course this book makes me feel bad for nature.  I grew up in house where my dad hunts deer (he's going again in a few weeks), so I am conflicted.  Though I will say he only hunts deer and doesn't go out to the forest and shot everything like this book implies that hunters do.

Check out my other Project Disney:
Snow White
Cinderella
Peter Pan
Treasure Planet
Sleeping Beauty
The Great Mouse Detective
The Hunchback of Notre Dame
The Princess and the Frog
Pinocchio
Fantasia
Beauty and the Beast
Lady and the Tramp
Alice in Wonderland
The Rescuers
The Rescuers Down Under
Tangled
Oliver and Company
Mulan
The Little Mermaid
101 Dalmatians
Frozen
Fantasia 2000
The Jungle Book
The Emperor's New Groove
The Sword in the Stone
Aladdin
Atlantis
The Aristocats
The Lion King
The Many Adventures of Winnie the Pooh
Winnie the Pooh (2011)
Robin Hood
Hercules
Pocahontas
Dumbo
The Black Cauldron
Mary Poppins
Lilo and Stitch
The Adventures of Ichabod and Mr. Toad
Make Mine Music
Tarzan
Fox and the Hound
Melody Time
Posted by Angela's Anxious Life at Friday, November 01, 2013