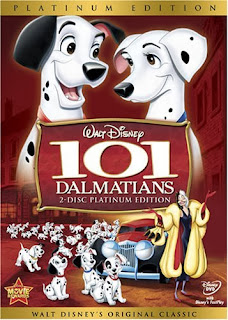 Project Disney this time around is 101 Dalmatians based off the book of the same name by Dodie Smith.  I thought the book was pretty cute.  There were quite a few changes from book to movie.  One of the biggest being the number of dogs and how that number came to be.  In the movie there are 99 puppies, and in the book there are 97.  The book includes another mama dog.  That's right.  When the Missus has the 15 puppies Mr. & Mrs. Dearly (Roger & Anita) go out and find another mother dog to help nurse these puppies and her husband.  This dog's name is Perdita... oh you've heard that before?  Yes that is because the film changes Missus' name to Perdita.  In this post I will be calling her Missus so there isn't any confusion. 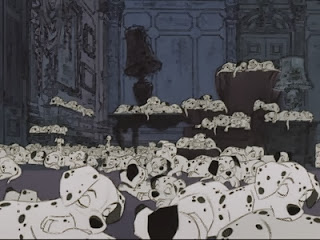 The movie begins with Pongo looking for love for Mr. Dearly.  I love this part as you get to see 1960's London.  He spots... the soon to be Mrs. Dearly walking her dog.  He and his master or "pet" as he likes to call his human go for a walk in the park and run into Missus and Mrs. Dearly. In the book... Cruella De Vil (last name spelling Devil) is an old school friend of Ms. Dearly's.  They go to her house for dinner and meet her husband who is a fur dealer.  Cruella sees Pongo and Missus and declares she would love a jacket made from their fur, she then discovers that they are expecting puppies and comes over when the puppies are born.  She tells the Dearly's that she would like to buy the puppies but they tell her they will be keeping all 15.  So the Dearly's go for a walk with Pongo and Missus and this is when Cruella stops by and steals the puppies.

When Cruella is introduced in the film one of my favorite villain songs is introduced.  Mr. Dearly sings a catchy song about her! She is a great villain.  As a kid I didn't love this movie.. I liked it.  Cruella wasn't a cool villain to me then.  But now .. I love her.  Such style!  Such pizazz! I love her cigarette!  I just love her! I know, I know.  She loves furs (I am not for furs by the way, I think they are terrible).  Back to the story.  So in the book now the dogs must run off and try to find the puppies.  They do use the midnight barking to find out information.  The book has a much longer journey of them getting to the puppies at Hell Hall.  The movie seems to focus more on the journey after they find the puppies.

At the end of the book.. when the dogs travel back to town, they all stop into Cruella's home and destroy everything (let in by her cat). The tear all her furs apart. She comes back from Hell Hall to find this and discovers she and her husband are ruined because the furs weren't paid for yet.  So they have to leave the country.  The Dearlys actually end up moving in order to keep all the dogs to Hell Hall!  The buy the property from Cruella.  That was kind of surprising to me. The movie has a car chase at the end (where of course we get to see her infamous car).  Cruella is run off the road... but we never see what happens to her so we know she can come back and get the dogs.

Lately with Project Disney I have also been watching the second movie to go with each movie. This one is all about Patch who gets left behind when all the other dogs move to a new home. Patch then goes out and meets his TV hero. I never thing the sequels for Disney movies are that great.  Here is another one.. though they do bring back all the characters that we love from the first movie.

So for One Hundred and One Dalmatians I never really loved it as a kid. In fact... I didn't like it at all.  I am not sure what it was... I wasn't really into the movies with the animals.  But as an adult I really like it.  I love Cruella more then ever.

Be sure to check out my other Project Disney:
Snow White
Cinderella
Peter Pan
Treasure Planet
Sleeping Beauty
The Great Mouse Detective
The Hunchback of Notre Dame
The Princess and the Frog
Pinocchio
Fantasia
Beauty and the Beast
Lady and the Tramp
Alice in Wonderland
The Rescuers
The Rescuers Down Under
Tangled
Oliver and Company
Mulan
The Little Mermaid
Bambi
Frozen
Fantasia 2000
The Jungle Book
The Emperor's New Groove
The Sword in the Stone
Aladdin
Atlantis
The Aristocats
The Lion King
The Many Adventures of Winnie the Pooh
Winnie the Pooh (2011)
Robin Hood
Hercules
Pocahontas
Dumbo
The Black Cauldron
Mary Poppins
Lilo and Stitch
The Adventures of Ichabod and Mr. Toad
Make Mine Music
Tarzan
Fox and the Hound
Melody Time
Posted by Angela's Anxious Life at Friday, November 15, 2013