This issue we talk about Green Arrow Vol 1 the Midas Touch,   Birds of Prey Vol 4 The Cruelest Cut ,   Supergirl Vol 4 Out of the Past, and Fables Inherit the Wind Vol. 17. 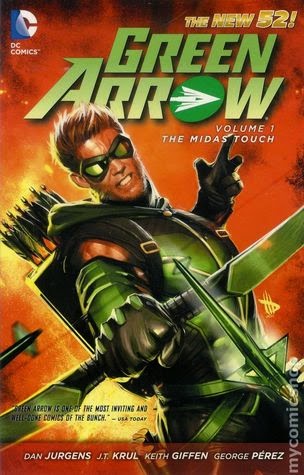 First up this issue I finally get around to reading the Green Arrow New 52 series.  I have been wanting to read this one for a while since I do watch the CW show Arrow.  Which I just love.  My library never did buy the first volume but they have all the other volumes so I finally was able to get a copy of The Midas Touch through the interlibrary loan. I liked the last have of the comic way more then the first half.  At the beginning of the comic we have the Green Arrow facing off against a group of villains that I have no idea who they are.  We are kind of just thrown into the Green Arrow world ... no introduction or anything.  If I didn't already know who he was I would be so confused.  These guys were like reality TV killers.  Just not my thing and overly done.  The second half of the book has Midas (a huge toxic being) and Blood Rose a ninja robot.  This was a much more interesting story. When I first saw a picture of Blood Rose I thought maybe Katana was being thrown in the mix ... though clearly I was wrong.  The artwork is amazing.. I did really enjoy looking at it.  I do like Green Arrow's (Oliver Queen) new look.  He has lost that Robin Hood blonde beard, though I will say that was like his signature look.  3.5 out of 5 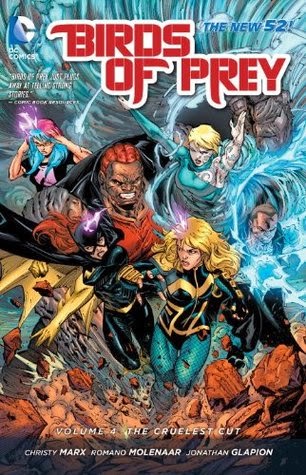 I am still continuing in the Birds of Prey comics.  I love to see a team of girls together and this issue was really good.  Mainly because it contains more of the Court of Owls which is a really interesting comic arc. I have a small problem with this one because half way through some of the story continues in the DC comic series Talon which I have not read yet. My library doesn't have it either so I went onto their site and requested it. Lots of background stories to the characters here.  And we even get a good old Batman villain Mr. Freeze included in this comic. I do think readers would enjoy this comic more if they know about the Court of Owls (though if you read Birds of Prey Volume 3 you would've realized that already).  One of my favorite things about these comics is learning more about Black Canary because she is in the Arrow show on CW and I like to learn more about her original character. 4 out of 5 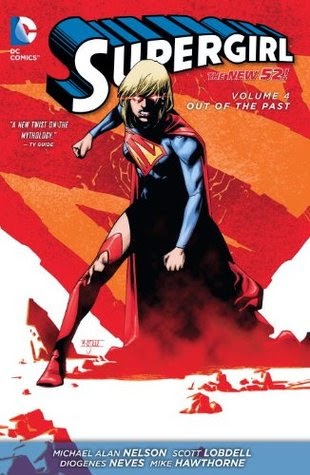 I just don't know how I feel about the Supergirl comics. She seems so naive to me.  Supergirl is still confused about everything that is going on present time.  She runs away from Earth because life here sucks (don't we all go through that). The end of this comic is all over the place.  Timeline swapping.  We go from one timeline to the next.  Past, future, it's crazy.  All to make sure the future isn't messed up. So there are additions of other comics in here.  DC's crossovers are really starting to be confusing.  I am really trying to follow all these DC comics but these crossovers are nuts.  I can always tell when one is about to happen because next thing I know the story line has just totally changed course. I'll still read Vol 5 and see what it's all about. 2 out of 5 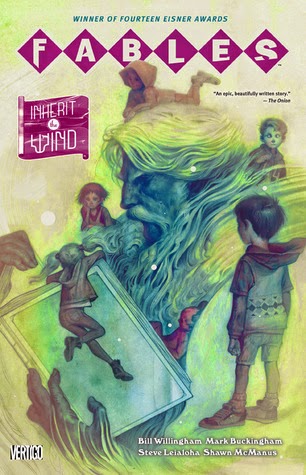 I am getting so much closer to finishing the Fables series.  I have really really enjoyed this one.  It takes fairy tales and puts them into the modern world.  I will say that this one was more of a filler volume. We have the group getting back to the Farm after the big battle, the winds trying to find out who will be the next North Wind.  So no big story plot here.  The final issues included in this volume is a few Christmas issues.  Which was kind of neat to read even though it's not Christmas as I read it. There is another odd story arc with some of the characters from OZ going to OZ which is being run by an evil emperor. This is really just a set up comic for a future story for Fables.  Though I find too many story lines may be going on at once.  Not one of my favorite Fable volumes.   3 out of 5

This counts for 8 comics towards my 2015 Graphic Novels Challenge!!