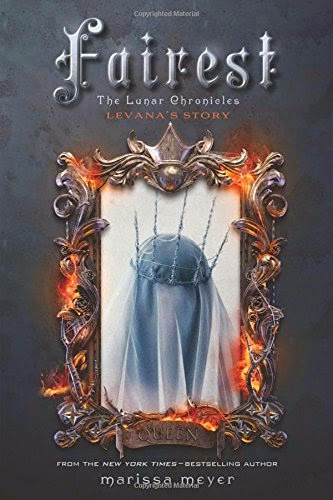 
In this stunning bridge book between Cress and Winter in the bestselling Lunar Chronicles, Queen Levana’s story is finally told. Mirror, mirror on the wall, Who is the fairest of them all? Fans of the Lunar Chronicles know Queen Levana as a ruler who uses her “glamour” to gain power. But long before she crossed paths with Cinder, Scarlet, and Cress, Levana lived a very different story – a story that has never been told . . . until now. Marissa Meyer spins yet another unforgettable tale about love and war, deceit and death. This extraordinary book includes full-color art and an excerpt from Winter, the next book in the Lunar Chronicles series.

Eek! I love this series so much. So when I found out that Meyer was writing a short book that Takes place in between Cress and Winter I was super excited. We get to learn all about Queen Levana's back story.  We learn she grew up in a non-loving home with a crazy sister.  I almost wonder if there isn't too much inbreeding in the family.  I am most impressed with the fact that Meyer wrote this in National Writing Month.  Which is an event a lot of writers participate in, usually not big writers.  So it was surprising to me that she did this.

I like that the villain was evil through and through.  Levana may have been good as a little child but she was evil not too long after.  We learn why Levana wears her veil, where Winter came from, even Cinder's back story.  Really Levana's story is sad... the fire tragedy that gives her her scars is probably what set her to really the wrong direction.  The fact that she does practically the same thing to Cinder is shocking to me since you would think Levana would not want anyone else to go through something like that.

I don't think that you have to read the first three books in order to enjoy this story but you will be more familiar with the characters if you do read the other three books.  I just love Meyer's writing and world building.  The sad thing is I have actually recommended this series to two people and neither one of them liked it.  WHAT!   I am like.. is it just me who loves the series but then I see the love all over the blogs and goodreads.

This is a must read if you love this series.