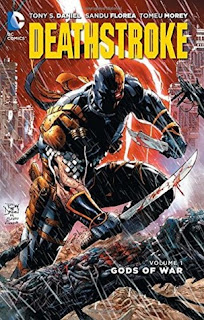 I haven't read anything previously with Deathstroke except Suicide Squad. I say that because most reviews I read about this comic are people comparing the New 52 Deathstroke to the other version.  I do know of the other one was an older man.. grey hair and a beard. Apparently this one is more like the guy in Arrow (Manu Bennett). There are A LOT of characters in this comic... so many cameos including Batman.  Is he in everything or what?  The comic has a spoiler for the Suicide Squad comics though I didn't think it was a big deal but if you want to avoid it read those first. This is another comic about father/son issues.  Slade Wilson (Deathstroke) is of course trying to help and save his family. I didn't love this comic.  Just a lot of stuff going on so I am not sure if this is going to be a comic series that gets a lot of issues if it doesn't pick up some with the story. The artwork is amazing.
2 out of 5 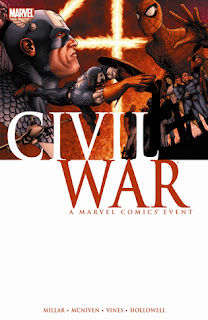 Most of you know that the next Captain America movie is him VS Iron Man in a film called Civil War.  So I was interested in reading the comic the film is based off of.  Since this is one of those big comic book events this volume only covers some of the event.  I wish it would say which volume though. I don't know much about Marvel (which I've mentioned before) but the characters in this comic are pretty well known.  The artwork is fantastic.  I enjoy that there are different opinions in the comic, Tony Stark wants superhero to register with the government and be civil service employees.  Captain America doesn't want to have to sign up and be registered.  The comic does do a good job of representing both sides.  As I read.. I don't know which side I would want to win.  I read that there will be a newer Civil War comic released soon. Spoiler for this comic:  So at the end of the comic Captain America just decides to give up and let Tony arrest him so he can be registered.  Apparently this is explained in other crossover novels. But this comic is so old (2007) that I am not going to bother trying to read all the comics.   3 out of 5 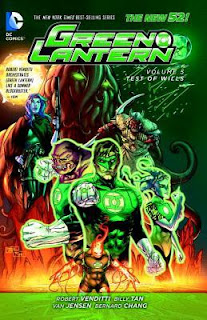 It's taken my a while to write this review.  I don't even have much to say about the Green Lantern comics. Some aliens take over the Green Lantern corps and broadcast a message making the world think they are Hal Jordan.  So they world now realizes that the Lantern's rings when used taken away from the life force of the galaxy.  This makes everyone made and against the Lanterns. I will say that the Green Lantern Corps shows up a lot in this issue and I haven't read any of their stuff so I was super confused there. Some new races are introduced... one that the character Gorrin-Sunn is apart of.  This race lives on a planet where the water is made out of a lava-like substance that acts like oceans, quite neat.  This is a super long volume so be ready for that. Part of the reason this comic is so long is because DC adds in the side stories that happen in other comics (Red Lanterns/Green Lantern Corps) and I appreciate that they try to do this. 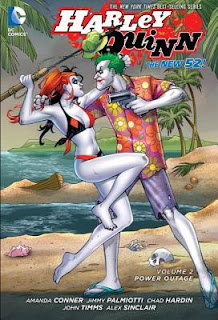 I am really enjoying the Harley Quinn series so much.  I just love her.  I never really thought I would because to me in the cartoon series I've seen her in she is so annoying.  There was a really quick Future's End story in here which is why you see the Joker on the cover.  Most of the comic follows a fun story that has both Power Girl and Harley Quinn teaming up.  Apparently Power Girl has lost her memory so Harley makes like they are best friends and they do a bunch of adventures together. My favorite story though in this comic is Harley's San Diego Comic Con story.  It is fun! There is a section in it where she runs into a bunch of people who are cosplaying her and she joins their little fan club.  The fan club is looking for a fun time so Harley really brings it to them. The girls are not ready for the good time that Harley is bringing.  They even end up in jail... I love this line up picture.  Can you spot the real Harley Quinn???

This counts for 9 comics towards my 2016 Graphic Novels Challenge.