This Strange Wilderness by Nancy Plain 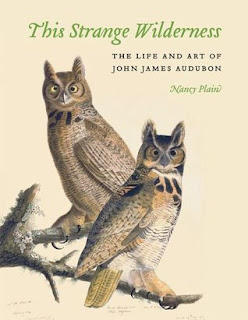 Birds were “the objects of my greatest delight,” wrote John James Audubon (1785–1851), founder of modern ornithology and one of the world’s greatest bird painters. His masterpiece, The Birds of America depicts almost five hundred North American bird species, each image—lifelike and life size—rendered in vibrant color. Audubon was also an explorer, a woodsman, a hunter, an entertaining and prolific writer, and an energetic self-promoter. Through talent and dogged determination, he rose from backwoods obscurity to international fame. In This Strange Wilderness, award-winning author Nancy Plain brings together the amazing story of this American icon’s career and the beautiful images that are his legacy. Before Audubon, no one had seen, drawn, or written so much about the animals of this largely uncharted young country. Aware that the wilderness and its wildlife were changing even as he watched, Audubon remained committed almost to the end of his life “to search out the things which have been hidden since the creation of this wondrous world.” This Strange Wilderness details his art and writing, transporting the reader back to the frontiers of early nineteenth-century America

I love birds. In 2003 I became really interested in bird watching and learned more about Audubon and discovered all his illustrations of birds. When I put this book on hold at the library I didn't realize it was aimed towards teens but it was still quite enjoyable.  For those of you who may not be aware of who Audubon is.. he was a man who explored North American and made over 489 painting of birds. He was one of the first artists to also paint birds life size and to draw birds in their natural environment.  This is before there was such thing as photography so for people to see these images was something special. I recently saw a display of his works at the Colorado Springs Fine Arts Center. Something that was truly special. 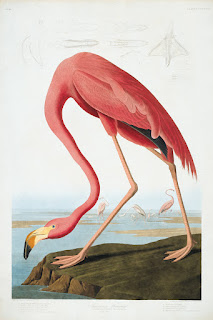 Plain writes an amazing story about Audubon's life using a lot of his own words from letters he wrote (I would like to read the books she sited next). I learned so much of Audubon's life, like the fact that he was sent to America by his father so that he didn't have to join Napoleon's army.  I learned about other naturalists at the time who would try to discredit Audubon's work.  At the time there was a lot of competition.  Audubon would travel around trying to sell subscriptions to his art to make money. 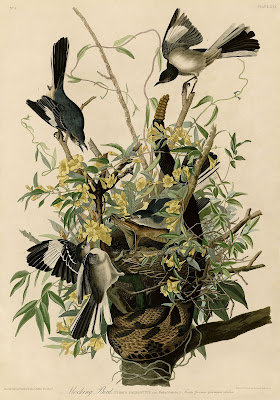 I also really enjoyed the illustrations included in the book.  Not just of the birds that he had painted but there were even portraits of Audubon that his sons has painted of him. What I wouldn't do to travel along with him out into the wilderness and see these birds.  One thing that surprised me was the fact that Audubon drew the birds and painted them, but had an apprentice draw and paint the background.  If you have never had the chance to check out Birds of America be sure to do it.  Your local library has a copy. 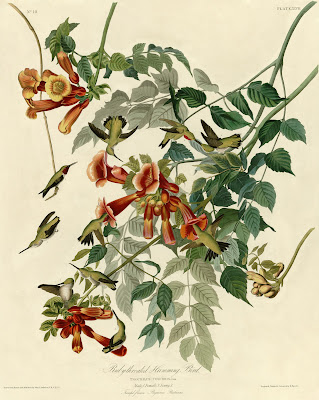 If you have any interest in birds or birding history this is a great book.  Audubon is a fascinating man.
Posted by Angela's Anxious Life at Sunday, February 28, 2016