This issue I chat about Grayson Vol. 2 We All Die At Dawn,  Catwoman Vol 7 Inheritance, Ms. Marvel vol 4, and Star Wars: Kanan Vol. 1. 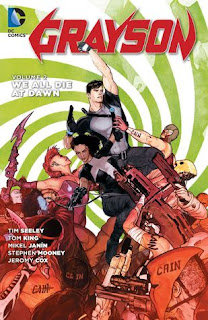 I didn't really enjoy Grayson Vol. 1 but when I read it Vol 1 had already come in from the library so I went ahead and read it. We kind of delve into the big Spyral spy ring. I'm a little confused though about the main parts... so Grayson and his crew are running around trying to find body parts for Spyral.  Turns out these body parts make a big villain ... and from each body part there is a Justice League member.  So the eyes are Aquaman's for example.... what I don't understand and is never mentioned is whether or not the organs are actually from the real superheroes?  And honestly... does it even matter now since DCs new Rebirth is coming out? There is a character in these comics called Midnighter and I am really interested in who this guy is.  In the Rebirth he is getting his own comic so I put it on hold and am excited to check that one out. There is a Grayson volume 3 coming out but I am going to skip that one.  That is really tough for me because I am the type of person who needs to complete series but I just can't keep going.  At least Nightwing is coming back in the Rebirth. 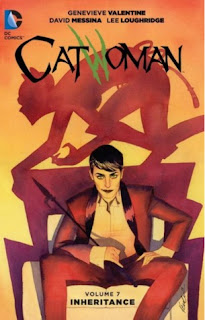 I think Catwoman hasn't been great the last few issues.  This whole mob thing is just annoying. I just realized that I may have accidentally not read Volume 6.  Damn it.  I hate when that happens.  Well apparently it's about the mob so I'm not going back to read it.  What's crazy is that I went back and read my review about Volume 5 and said I wasn't going to read Catwoman anymore.  Well.... guess I forgot about that. I'm not into the comics that are about crime.  I want superheroes.  I miss the earlier issues of Catwoman.  It seems like she is leaving Gotham for Volume 8 so I don't know what to expect. Maybe I am just burned out on comics lately.  That could be it because this comic has a high rating on goodreads.  I guess that it was neat to learn about the different Gotham crime families.  But I want to see Catwoman stealing, being naughty.  I didn't love the artwork either.  The next volume has a different author so hopefully it goes in a totally different direction.  EDIT: I just looked at my library and the reason I read this before vol. 6 is because my library ordered this one first.  Ughhh 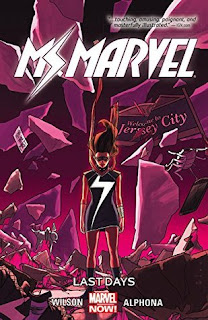 Just when I think I am done with comics and they suck I read a comic like this one and fall right back in love. Ms. Marvel is an amazing series.  I have been impressed with it since volume 1. So finally Ms. Marvel gets to meet Captain Marvel whom she fangirls over all the time.  What I really LOVE about this comic book series is that it is cohesive.  Volume 4 Last Days follows the pervious volumes perfectly.  There is no drastic change in the character, no wacko big switch up of the plot.  The side characters have really been fleshed out so we still care about them.  This comic is about the world ending which everyone in the comic keeps calling a zombie apocalypse, so funny. Maybe I am just bored with DC (see my previous reviews) and need to move on to more Marvel titles.  There is even a little Spiderman story in this that read so well.  I want to pick up a Spiderman title soon because of it. I am still really impressed by the artist of the comic as well.  Just matches Ms. Marvel's personality.  Funny little things you can find throughout the panels in the comic.  Pick up this series if you haven't yet.
5 out of 5 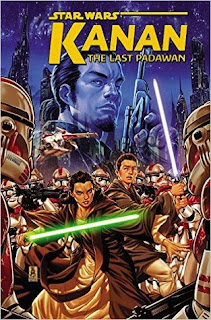 Wow.  This was super good.  I didn't know what to expect from this comic.  I had no idea who Kanan was before reading it.  Turns out he is a guy from the show Rebels.  I decided not to watch that show because the last Star Wars cartoon I watched, Clone Wars, was canceled by Cartoon Network in the middle of the series.  It was finished eventually on Netflix but I was over it by then.  So to be honest I was very apprehensive about starting Rebels so I just didn't start it.  This comic of course makes me want to watch it. This was a great story about a young Jedi who is a Padawan during the Clone Wars.  I loved it... the characters are just so great and well written. I think the Star Wars comics have been only OK so far but this was a good one.  Maybe because it's a completely new story where the other ones I've read are characters we already know from the movies.  If you are looking to start somewhere in the newer Marvel Star Wars comics this is one to begin at.


This counts for 25 comics towards my 2016 Graphic Novels Challenge.