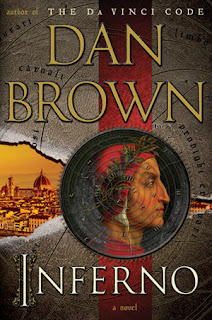 
In his international blockbusters The Da Vinci Code, Angels & Demons, and The Lost Symbol, Dan Brown masterfully fused history, art, codes, and symbols. In this riveting new thriller, Brown returns to his element and has crafted his highest-stakes novel to date. In the heart of Italy, Harvard professor of symbology Robert Langdon is drawn into a harrowing world centered on one of history’s most enduring and mysterious literary masterpieces . . . Dante’s Inferno. Against this backdrop, Langdon battles a chilling adversary and grapples with an ingenious riddle that pulls him into a landscape of classic art, secret passageways, and futuristic science. Drawing from Dante’s dark epic poem, Langdon races to find answers and decide whom to trust . . . before the world is irrevocably altered.

Honestly... I love Dan Brown's Robert Langdon books. I have discovered that these books follow the same format though.  Very similar to the Stephanie Plum books by Janet Evanovich which repeats the same template over and over.  Dan Brown's books do go a little overboard describing everything in so much detail.  I love art so I enjoy reading Brown's descriptions of art.  I even googled some to see what the art/buildings really looked like but that got tiresome.  Brown's book should come illustrated all the time as first editions, not just special editions years after the book as been published.  I read the book I already owned which I purchased when it first came out so I didn't get the illustrated. From now on I'm going to wait to buy his book until the illustrated is released. I have The Da Vinci Code and Angel's and Demons illustrated editions and they are totally worth it. 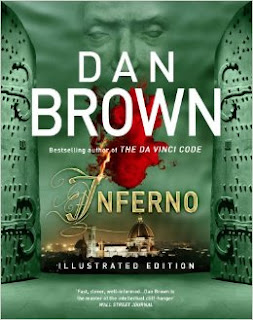 So this particular Robert Langdon book is about how he wakes up in a hospital after being shot in the head and can't remember a thing. He begins to figure out that there is a plague that is going to be released on the world.  The plague was created by a man who believes that over population is what is going to destroy the world. Honestly the more I read the details about overpopulation in this book the more it scared me.  Are the facts true about how fast we are growing and using up resources in the book true?  I don't know.  But if it is that is a scary statistic. Where will the plague be released and can it be stopped becomes Langdon's mission in this book.  Since Langdon has lost his memory with short term amnesia we are the readers get to go along this adventure with him and try to figure things out.

This book's mysteries are mainly based off the Divine Comedy "Dante's Inferno" by Dante Alighieri.  I had never give The Divine Comedy much thought prior to this book.  I didn't even really know what it was about.  This book opened that whole world to me. I need to read that book soon.  The book sounds fascinating to me and of course it's free to read in the public domain.

There is a movie in the works for this book.  I'm surprised they just skipped over The Lost Symbol but there was a big profit drop between The Da Vinci Code movie and the Angels and Demons movie.  Originally, Inferno was supposed to come out in 2015 but got pushed back to October 2016. I hope it's successful, a lot of times when a movie is pushed back it's because it wasn't very good and then the movie studios try to fix it up.   I am not sure when Dan Brown's next book will come out.  I have looked around for any hints or information but haven't found any.

If you like Dan Brown's previous books you'll like this book.  If you think the books are cheesy writing, and you roll your eyes, well it's not for you.  I like fluff books sometimes.  Books were I can just enjoy the ride.  I can't wait for the next Robert Langdon book. 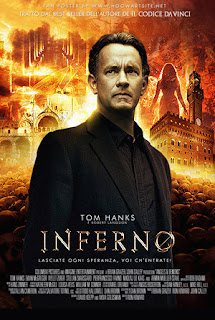