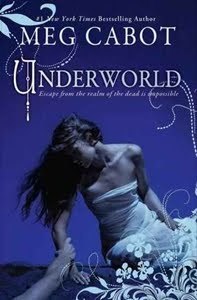 Continuing my journey through the Underworld... here is the goodreads description:
Escape from the realm of the dead is impossible when someone there wants you back. Seventeen-year-old Pierce Oliviera isn’t dead. Not this time. But she is being held against her will in the dim, twilit world between heaven and hell, where the spirits of the deceased wait before embarking upon their final journey. Her captor, John Hayden, claims it’s for her own safety. Because not all the departed are dear. Some are so unhappy with where they ended up after leaving the Underworld, they’ve come back as Furies, intent on vengeance…on the one who sent them there and on the one whom he loves. But while Pierce might be safe from the Furies in the Underworld, far worse dangers could be lurking for her there…and they might have more to do with its ruler than with his enemies. And unless Pierce is careful, this time there’ll be no escape.

So I read this book because I am determined to start finishing series. We chose to read Awaken for my Young Adult Book Club which lead me to read this book.  I must admit that I enjoyed this book way more then first one.  But I will admit I thought this book was going to take more time with the reader getting to explore the underworld.  But again, we spend a lot of the book in present time Florida.

This book ends with a GREAT cliff hanger.  It makes me totally interested in reading book three.  I also think I enjoyed this book better then the first because the relationships are becoming much more interesting.  We are even introduced to a few new characters and villains!!  I will say though I didn't feel like the plot moved very far which is why I am only giving the book 3 stars.  Middle of the road for me.  We kinda just chase around Alex who is Pierce's cousin through the whole book.  And I mean the WHOLE book.  Not much more is revealed about John's past either.  Maybe I should start just waiting for book 3 to come out and then finish the trilogy!!