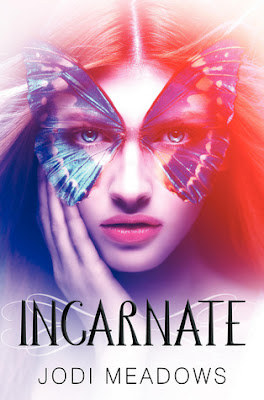 I have been wanting to read this book ever since I saw the cover for it.  Everyone was getting ARCs and I just kept seeing the cover all over the blogs!  Here is the goodreads description:

New soul
Ana is new. For thousands of years in Range, a million souls have been reincarnated over and over, keeping their memories and experiences from previous lifetimes. When Ana was born, another soul vanished, and no one knows why.
No soul
Even Ana's own mother thinks she's a nosoul, an omen of worse things to come, and has kept her away from society. To escape her seclusion and learn whether she'll be reincarnated, Ana travels to the city of Heart, but its citizens are afraid of what her presence means. When dragons and sylph attack the city, is Ana to blame?
Heart
Sam believes Ana's new soul is good and worthwhile. When he stands up for her, their relationship blooms. But can he love someone who may live only once, and will Ana's enemies—human and creature alike—let them be together? Ana needs to uncover the mistake that gave her someone else's life, but will her quest threaten the peace of Heart and destroy the promise of reincarnation for all? Jodi Meadows expertly weaves soul-deep romance, fantasy, and danger into an extraordinary tale of new life.

I really loved the ideas in this book... souls that had lived thousands of years.  Imagine knowing everyone that long and being such a tight-nit community.  Like a small town almost.

Possible spoilers:  I didn't always love the book though.  I read it in one day for my read-a-thon and wish it would've kept going.  I wonder though about the future books.  I have a feeling they are going to take place in the father future.  I think the new souls that are going to come are going to be grown into teenagers and that some of the people will be reincarnated to hunt down Ana.  That is just my guess anyways and you can't do that if the books starts up right away where it left off.

I love the spooky villains in the book and hope we learn more about them further on.  Where do the dragons come from and the sylths. I wish we could've learned more about the world's past.  BUT we spend most of the book with Ana and her love interest Sam.  They are always playing music and Ana is always untrustworthy of anyone.  So we have to sit around and read about all that. This whole book seemed to be about romance instead of the utopian environment.  Disappointing.  I hope that books later on going more into the world.

Then Ana enters the temple that we have been reading about in the whole book.  It was cool but then I was confused.  Nothing really was explained.  I want to read book 2 in the hopes that the author gets it right a little more!!!  It gets three stars because the ideas in the book were pretty neat.

My review on Asunder book 2.