I am happy to tell you that I am a featured blogger over at the Hopeful Heroine  !  I met her during Blogger Appreciation Week and am so glad I did. I answered a few interesting questions about banned books....  Go HERE to read my interview... or read it right below! 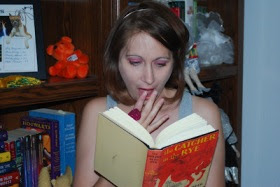 What is your favorite banned book? Catcher in the Rye is my most favorite banned book EVER.  I love this book and really relate to it.  I didn’t read it until my early 20′s and wish I had discovered it in my teens.  For those that don’t know… between 1961 and 1982 The Catcher in the Rye was the most censored book in high schools and libraries in the US.  It is mainly challenged because of the sexual content and offensive language found in the book.  Some of the complaints are that the main character, Holden, is a poor role model, encourages rebellion, and promotes drinking, smoking, lying, and promiscuity.  One thing though that is surprising to me is that this book is still banned in 2012 and yet was written in 1951!!  This is an amazing book.

2. Did you ever sneak around to read a banned book? Have a good story? Or do you have a horror story associated with a banned book? i.e. got caught and grounded…  Sorry to bore you guys with the answer to this question, but no I haven’t ever had anything bad to me happen with a banned book.  I have wonderful parents who are well read.  They never told me no about any book I was reading.  In fact… if anything  my mom would introduce me to banned books and let me come up with my own opinion about books.  Unfortunately out of all my friends when I was a teenager I was the only one who read so I don’t know any of them either who were not allowed to read banned books.  I also haven’t really come across my school or my library banning a book either.  I am grateful for all of this too!

3.  Why do you feel promoting a banned book is important?  I personally feel this is important because I feel author’s and reader’s voices should not be silenced.  Funny that many people ban books especially from teens yet soooo many people seemed to go out and buy Fifty Shades of Grey.  Perhaps with so many people reading this book it will cause more people to see that all literature can be good no matter the subject.  I find in my Goodreads group that I moderate, the YA Book Club, that we tend to talk a lot about sex and language in books.  I have a lot of teens and parents in the group who debate a lot over if the parents should say whether or not a teen should read a book.  The debate seems to go on and on with no straight answers.  I just hope that someday there are no banned books.   What do you readers think?

I want to thank Cait at the Helpful Heroine for having me as a guest blogger!  I really enjoyed it!  Here is one of the fun illustrations from her blog!