Project Disney-Princess and the Frog 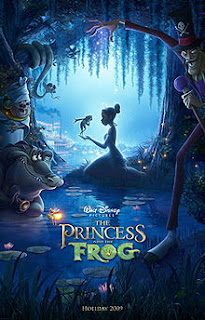 This week we are watching and discussing the books for The Princess and the Frog.  The books we are using are The Frog Princess by E.D Baker and the Frog Prince by the Brothers Grimm (you can read the whole Grimm story at that link).   For those who don't know what this movie is about here is a little description: A fairy tale set in Jazz Age-era New Orleans and centered on a young woman named Tiana and her fateful kiss with a frog prince who desperately wants to be human again. I love this movie.  The whole Louisiana scenes in the film are wonderful.  And the music!!  Almost there is an amazing song that inspires me every time I hear it!  I love the art deco art that is drawn in this movie which you can really see here:


Let's start with comparing this movie to the Brother's Grimm version. If you have been following my Project Disney posts you know I love the Grimm stories. I love the Wickedness that they are. This one is terrible too! In the original Grimm version of the story the frog's spell was broken when the princess threw it against a wall in disgust.  That has always blown me away!!  Speaking of evil.. this movie has one of the best villains in a Disney film in my opinion.  It is the first time in a long time Disney has a true evil villain.

Back to the villain... The Shadow Man! I love the Voodoo that he does and his "Friends on the Other Side".  I mean the guy just straight up kills Ray.  I remember when I was at the theater watching this I was like... did that really just happen???

Ok now let's talk about The Frog Princess by E.D. Baker which is the book the movie is really based off of.  I hadn't heard about this cute little series until I was doing project Disney.  I of course thought the movie was based off of the Grimm story.  This book is a perfect fit for the movie.  In this book... the girl who is named Emma does kiss the prince Eadric and is turned into a frog also.  There is no villain like the Shadow Man.. the two frogs go on a journey to find the witch who started the spell in the first place to get it reversed.  Just like the Disney movie.. they find fellow animals as comrades in their adventures.  In the book it is a large snake Fang and a bat Lil'.  In the movie of course we have Ray the lightning bug (the frogs in the book eat lightning bugs for dinner) and we have the musical alligator Louis.  I love both these characters.  They are fun!  Tiana has a good friend in the movie Charlotte.  There really isn't a character in the book to represent her at all.  She is a good friend to Tiana though.

I had no idea about this book series... I loved this book so much I will for sure be reading the entire series! I think E.D. Baker does a good job of writing books that are a spin on this fairytale.    One thing I would like to mention is I am glad that a black princess is finally being used here.  Yes I know everyone complained that the prince Naveen isn't actually black.  But hey Disney got close right?  It was about time.  Bravo! The book has nothing to do with Louisiana, jazz, or a girl trying to open a restaurant.   I thought this was very creative on Disney's part and a good story.

Usually at the end of my Project Disney posts I show you pictures from Annie Leibovitz.. but she hasn't done a Disney Dream Portrait from this movie yet.  Disappointing Annie!!  That one should be next! I could go on and on about this movie and the book!  I really do love both.

Update:  Annie did finally do a portrait!  yeah! 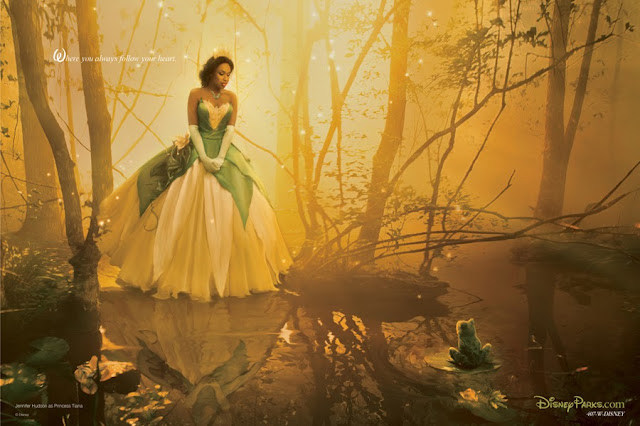 Be sure to check out my other Project Disney posts!!
PROJECT DISNEY:
Snow White
Cinderella
Peter Pan
Treasure Planet
Sleeping Beauty
The Great Mouse Detective
The Hunchback of Notre Dame
Fantasia
Beauty and the Beast
Lady and the Tramp
Alice in Wonderland
The Rescuers
The Rescuers Down Under
Tangled
Oliver and Company
Mulan
The Little Mermaid
Bambi
101 Dalmatians
Frozen
Fantasia 2000
The Jungle Book
The Emperor's New Groove
The Sword in the Stone
Aladdin
Atlantis
The Aristocats
The Lion King
The Many Adventures of Winnie the Pooh
Winnie the Pooh (2011)
Robin Hood
Hercules
Pocahontas
Dumbo
The Black Cauldron
Mary Poppins
Lilo and Stitch
The Adventures of Ichabod and Mr. Toad
Make Mine Music
Tarzan
Fox and the Hound
Melody Time
Posted by Angela's Anxious Life at Friday, May 17, 2013